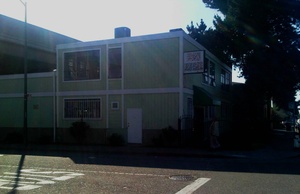 Masjid Al-Salam is located at 1005 7th Street in West Oakland.

This Muslim place of worship is on a dead end cul de sac close to the Port of Oakland and within walking distance of the West Oakland BART Station.

The main prayer hall has space for up to 100. There is a separate entrance to the Women's area.

It's mostly an Arabic speaking congregation. Very friendly to non-regulars. They seem to have earned respect from neighbors and local police.

During Ramadan they have nightly Iftars at Sunset to break the fast with Nightly Taraweeh prayers thereafter.

Parking? Being a dead end street, they QUADruple park so keep that in mind if you're in a rush.

There have Basketball nets hanging from the fences enclosing the west side of the building. The kids seem to make good use of it while the grown ups are inside.