Matthew R Bronner was elected to City Council in 1909. 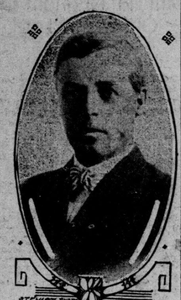 San Francisco Call4Matthew Bronner was born on January 3, 1873. He was born and raised in Sacramento and attended Sacramento public schools and the Sacramento Institute, class of 1889. He was a manager of the James A Joyce Company for 10 years and then took the position of assistant cashier at the Central Bank of Oakland.

While on City Council, Bronner was chair of the Fire and Water Committee. He worked a lot on streets and sidewalks and the western waterfront, advocating for municipal ownership of the water rights. He also believed in consolidating the city and the county and writing a new charter.

After City Council, Bronner was elected to position of School Director in 1911. He was chair of the Finance and Revenue Committee. In 1913 he was defeated by Mrs Harriet E Hawes, a "candidate of the women." Bronner was the only incumbent who did not win that year.6

Bronner was a member of the Knights of Columbus, Woodmen of the World and the Young Men's Institute.2 He was elected the grand knight in for 1913.5 He was also a member of the Oakland chapter of the American Institute of Banking and once gave a speech titled "As Seen Through a Banker's Window."3