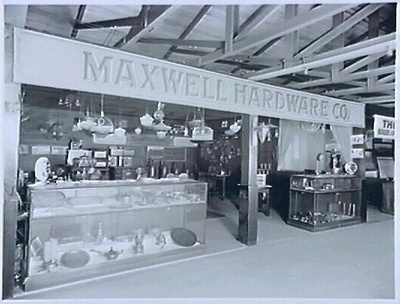 Maxwell Hardware ("The Always Reliable Store") was a local hardware chain, founded in 1886.

Maxwell's sons were William F. Maxwell, Frank C. Maxwell, and John P. Maxwell (the namesake of Maxwell Park.) Calvin ran the store until he retired in 1898 and John took over management. John ran the store until he retired in [<1939], and John's son-in-law, Carleton Bryan took over. After Bryan's untimely death in 1951, his sons Carleton Bryan, Jr. and John Maxwell Bryan took over. The chain grew as large as 6 stores in the East Bay, but ultimately John Maxwell Bryan liquidated the business. [ year unknown, but there's no listing in the 1967 directory ]

After outgrowing the 12th Street location, in 1893 C. L. Maxwell & Sons moved to 1164-1166 Washington Street in the Westphal Building. This would be their home base for the decades to come. They sold everything from stoves and plows to bicycles and sporting goods. 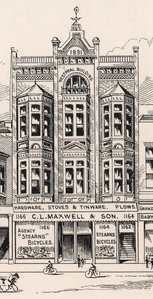 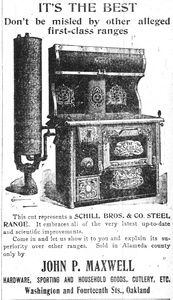 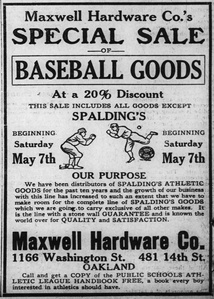 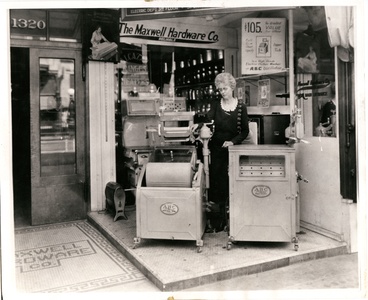 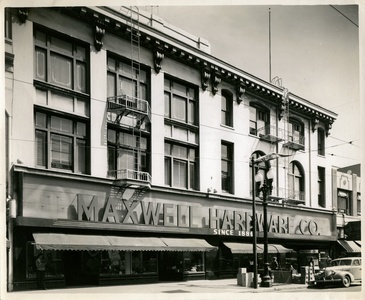 By 1939, Carleton Felton Bryan, John P. Maxwell's son-in-law, was president of Maxwell Hardware. In addition to the main store, they had two branches in Berkeley, one at Addison and Shattuck, and the other at Telegraph and Channing.

In December, 1939, the company took over Perry C. Fry Hardware at 3300 East 14th St. (now International Blvd.) John Nebeling, with Maxwell's since 1913, was made general manager of the new branch. 2 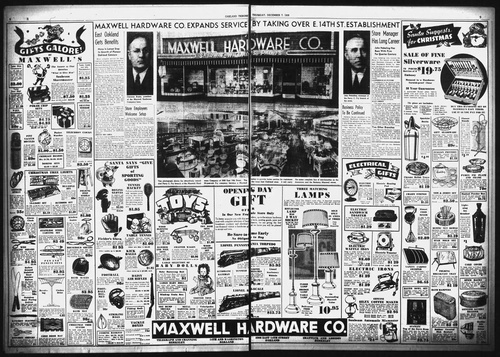 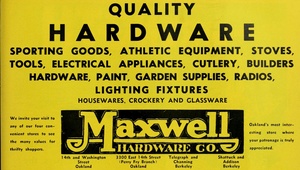 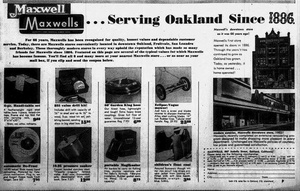 Oakland Tribune May 1, 1952By 1951, Carleton Bryan had stepped aside. His sons, John Maxwell Bryan and Carleton Bryan, Jr. were running the business. In September, they spent $100,000 modernizing the Washington St. store, adding a passenger elevator for the 3 floors plus the new basement section. 3

Carleton Bryan Sr. died a short time later in October, following a long illness, and the stores were closed early in his memory. 4 He left an estate of $435,595, divided between his wife, Kathryn F. Maxwell (Bryan) and his sons. 5

The chain eventually grew to 6 stores, including a construction supply store in San Leandro. 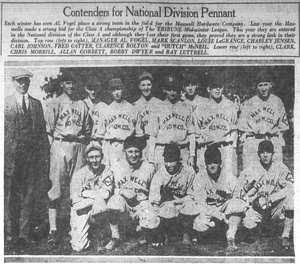 In 1908, the company began sponsoring a baseball team which had formerly been the A. G. Spalding Bros. team. Their practice games were against the Fruitvale Athletes, League of the Cross, and the Melrose Terminals. They opened the 1908 season against the Young Phenix of St. Mary's College. 6

Maxwell Hardware donated a beautiful silver trophy for the winner of a 1909 auto race sponsored by the Reliance Athletic Club.

The 1922-1923 Tribune Mid-Winter League baseball team was particularly talented, and expected to vie for the division pennant. 10

In 1948, they sponsored a series on KLX Radio with Cal's basketball coach, Nibs Price. This followed a radio series with Cal football coach, "Pappy" Lynn Waldorf. 8

Things had changed by 1952, but they were sponsoring another baseball team. The company team was in Class B of the Central League of the Police League, and played the Williams Dairy team at Raimondi Park. 9