Jump to Maxwell Park - a neighborhood roughly between 580 and Trask (or Brookdale) and High and 55th.

Maxwell Park is a mostly residential neighborhood near Mills College.

There are mostly families that live here (lots of single-family homes) but you'll also find Mills students living here. It's an area with a very active community life (see "neighborhood groups" below). Maxwell Park is also where the mosaic tile trash can trend started (specifically, it originated from one of the community groups). 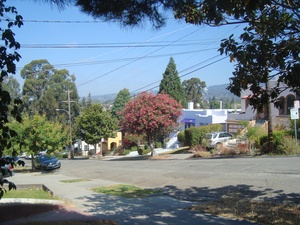 photo by mk30The area was originally owned by John P. Maxwell, who bought it with the intention of selling it for housing. Lot sales began in 1921 and sold out by 1922. Southern Pacific ran electric train lines close to the entrance of Maxwell Park and Maxwell made sure the 55th Ave. Streetcar would come into the area. During the 1920s development, the houses had to be designed with some type of individuality, so the tract ended up with a variety of styles.

The quick sales of the homes could be attributed to the streetcar, the variety of designs, the ridiculously low downpayment required- $1- or the "newness," since each house was custom built. 1

Here are some perspectives from folks who live here.

This history of Maxwell Park was written by Russell Yee and was originally posted to the Maxwell Park Neighborhood Council website: 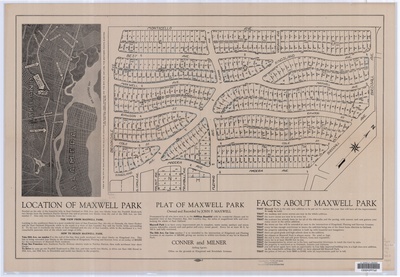 So reads excerpts from the original 1921 homebuying promotional flyer for the East Oakland’s Maxwell Park neighborhood. Despite being Orientals and/or Asiatics, this is where my parents bought a house in 1965 and where I grew up, right in the center of the neighborhood, as a third-generation Oakland native.

John P. Maxwell was a native of Illinois and an eventual resident of Adams Point. At age 17 he took over operations of the downtown Oakland hardware firm C. L. Maxwell & Son. He prospered and served terms as president of the Athenian-Niles Club and of the California Retail Hardware Association. While in his early 50’s he bought, subdivided, and developed Maxwell Park as “Oakland’s Addition Beautiful.”

Every one of these houses is to be a distinctive product of its creator and will make MAXWELL PARK a place of beauty which any man, woman or child will be proud to call home.

Once the neighborhood became less “well restricted,” the man and woman who were my parents, and the child who was me were proud to call Maxwell Park our home. Of course I could take offense at the exclusion of my ancestors being touted as a benefit on the level of good utilities and nearby public transportation. (The flyer could just as easily have read, “Good storm sewers, fully paved sidewalks, restricted as to Irish and Jews.”) Nevertheless, I owe a debt to Mr. Maxwell. If he had not put his capital into play, if he had not hired minions and staked his reputation on being a developer, if applying his name to some 477 of the original homes had not added to the needed ego motivation to see the project through, then the houses would not be there, the hilly streets where I rode my bike and trick-or-treated as a boy, where I walked to and from school alone and unafraid, where I played in Courtland Creek, and from where I cultivated the proud sense that Oakland is my city and my home.

During the ‘80s many homes become rentals and too many fell into visible neglect. But then in the ‘90s and now into the new century, Maxwell Park became one of the few neighborhoods in the inner Bay Area to still have anything remotely resembling starter homes. And so Mr. Maxwell’s promise remains good, now very much for Asian-Americans, African-Americans, Native-Americans, Caucasians, Latinos, and everyone else buying houses, freshly painting and landscaping them, and enjoying the still-rising property values. My parents remark that one now (again) sees single women out alone in the evenings walking their dogs. I am glad for them and for us all. Hopefully we can together aspire in each new generation to be Oakland’s Additions Beautiful.

Postcript: The most famous denizen of Maxwell Park was surely the decidedly Oriental/Asiatic Bruce Lee, of international martial arts and moviemaking fame. In 1964, he drove from Seattle to the Maxwell Park home of local Kung Fu master James Yimm Lee. There, in the garage of 3039 Monticello Ave., was James’ martial arts studio. Bruce was particularly impressed by the specialized workout equipment designed and built by James, who had been a welder in shipyards at Pearl Harbor.

Bruce decided to move to Oakland to live and train with James. Together they ran a martial arts school in that garage and developed the Jeet Kune Do style now associated with Bruce’s fame. So it was that for two years, Bruce, his newlywed wife, Linda, and then their firstborn, Brandon, lived in Maxwell Park.

(Is this not a golden opportunity for Oakland to create a major tourist destination? How many people around the world have never heard of Jack London or Joaquin Miller but instantly associate a Kung Fu ready position with The Dragon, Bruce Lee?)

The Park in Maxwell Park

The Maxwell Park neighborhood has a park called "Maxwell Park" located at 4618 Allendale Avenue. The park goes from Fleming Avenue to Allendale Avenue and is between High Street and Monticello Avenue. There is a lot of amazing mosaic work in the park especially on the outside of the restroom. There is a children's playground and tables for playing chess. In April the wildflowers start to bloom. 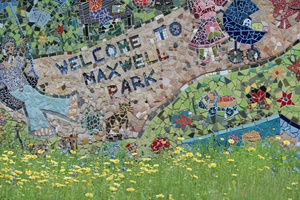 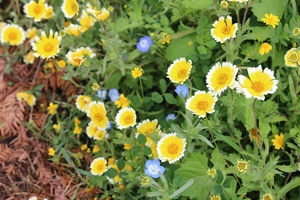 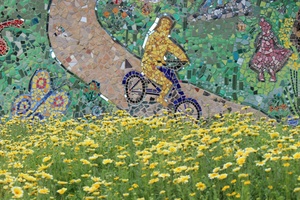 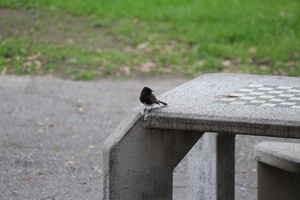 Here are lots of pictures of the glorious mosaics in the park (click left and right to go through the slideshow, or in the midle for info about the picture you're looking at):