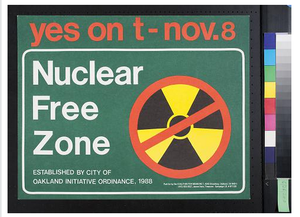 "yes on t" poster, courtesy of OCMAIn 1988, voters adopted Measure T which declared Oakland a Nuclear Free Zone. The measure passed with 57% of the vote.2 On December 6, 1988, the city council enacted Ordinance No. 11062 C.M.S., the Nuclear Free Zone Act. This act prohibits the city from doing business with any contractors, companies and consulting firms who knowingly engage in nuclear weapons work.

Firms must fill out a Nuclear Free Disclosure form (Form-S). If they don't fill it out, they're considered a nuclear weapon maker and restricted from having a contract with Oakland. (see the Disclosure Form for more details.)

The federal government sued Oakland over Measure T. (See: United States v. City of Oakland, 958 F.2d 300 (9th Cir. 1992)). The suit invalidated Measure T on the grounds that the Federal Government has constitutional authority over national defense and atomic energy, and Oakland is a major port and has freeways and train lines running through it.3 In 1992, the Oakland City Council reaffirmed Measure T "to the extend legally possible" in Ordinance 11478. ordinance 11478.pdf

In 2013, the contractor chosen to implement Phase II of the controversial Domain Awareness Center was found to be in violation of Measure T.