this page needs updates with what is going on prior to Measure Y going up for renewal in November, 2014.

Measure Y or The Violence Prevention and Public Safety Act of 2004 is a measure passed in 2004, and amended by Measure MM in 2010. It raises funds by both a parcel tax on Oakland property and a parking tax assessment, generating approximately $20M annually. The term of this funding will end in 2014. These funds are used for increased policing resources (about $12M), community-based violence prevention programs ($8M), and a level of fire department personnel to keep two fire stations open ($4M). 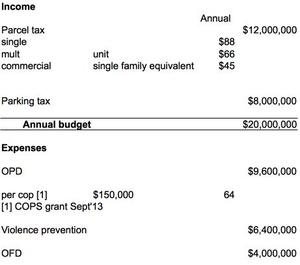 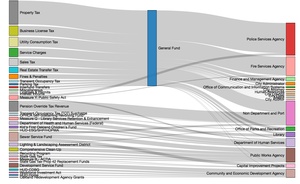 Trying to keep the same general placements and focusing just on Measure Y, we get something like this (MeasureY_budget.svg): 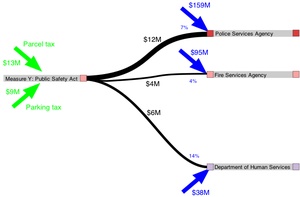 The city council put a new tax on the March 2004 ballot, Measure R. It was narrowly defeated.

As originally passed, Measure M called for the city to maintain a police force of approximately 800 officers in order to collect the parcel tax. This was changed by Measure MM in 2010 which dropped that requirement.