The Merritt neighborhood (aka Eastlake or East Lake) is a neighborhood in the San Antonio District on the southeast side of Lake Merritt.

It's mostly a residential neighborhood with a few main thoroughfares passing through (East 18th St., International Blvd., 12th St.) and a nice park. Of course, it also borders the Lake, which is delightful.

It's got a mix of people from different socioeconomic backgrounds and ethnicities with southeast asian folks, black folks, white folks, and latino folks living here.

An affordable senior housing center is currently under construction at the corner of 2nd Ave and East 15th Street.

Based on living there for a year, no one ever had any idea what I was talking about when I said that I lived in either Merritt or EastLake, but consistently, everyone knew exactly where I meant when I said "I live by the lake, down there by that taco truck." Indeed, Tacos Mi Rancho is the arrow in the very heart of this neighborhood (if the neighborhood was a dragon or a mythic spectral deer). 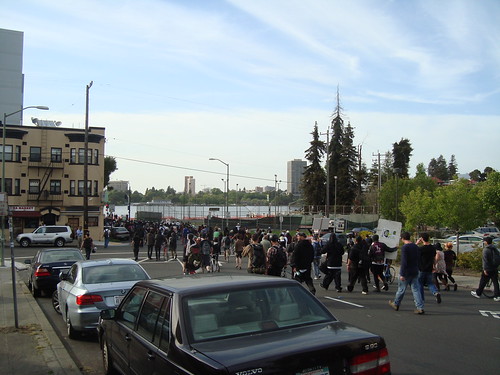 Occupy Oakland May 1st General Strike passing through Merritt (source)
I guess this was a fancy area on the east side of the lake originally? Railroads or streetcars (not sure!) went down 12th St. from downtown to East Oakland, so there was that. Boy, this section needs work...