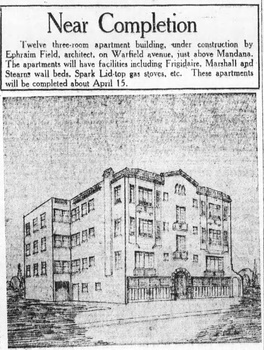 The Millard Apartments are in a building at 859 Warfield, and are almost identical to the Boulton Apartments at 829 Warfield. Both were designed and built by Ephraim Field. The Millard was built in 1928 for Abby D. Lea. 1

As with the Boulton Apartments, the apartments originally featured Frigidaire refrigerators, Marshall and Stearns wall beds, and Spark Stoves.

Apparently the Tribune ran the wrong photo, because the image is of a different building which doesn't include the garages, bay windows, and other prominent features.

An earlier article had a drawing of the correct building. 2 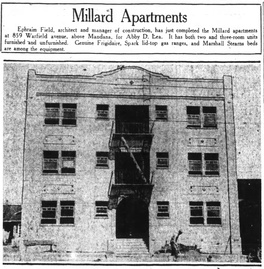