Raising the minimum wage is a major issue in Oakland and the East Bay in 2014, and figured prominently in the 2014 Election. A measure to establish citywide minimum wage in Oakland was on the ballot in November 2014 (Measure FF, described below). An alternative measure proposed by the Oakland Chamber of Commerce was voted down by the city council this summer. At last count, the Registrar of Voters had the measure passing with 81% of the votes. 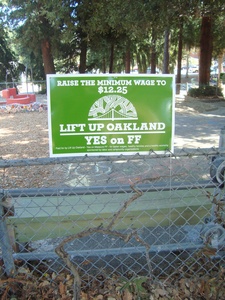 Measure FF is an Oakland city ballot initiative that was on the ballot on Nov. 4, 2014. The measure passed in a landslide.

Information bulletin on the changes that will take go into effect on January 1, 2016.

The main elements of the measure are:

Here is the full text of the measure.

After the Ordinance Passed

After the ordinance passed, different businesses responded in different ways.

In March, 2014, a committee, "Lift Up Oakland for better wages, healthy families and a healthy economy sponsored by labor and community organizations" filed a 410 to get a measure on the ballot that would establish a minimum wage, require pay for accrued sick leave, and require payment for service charges to hospitality workers. The measure obtained enough signatures to be put on the ballot, and will be decided in the November 2014 election as Measure FF. http://www.liftupoakland.org/

Here's a 30 second tv spot created by Lift Up Oakland:

UPDATE: On July 29, 2014, the City Council voted 5-3 against the ordinance. Kernighan, McElhaney and Reid were the supporters. Storify of the meeting here. 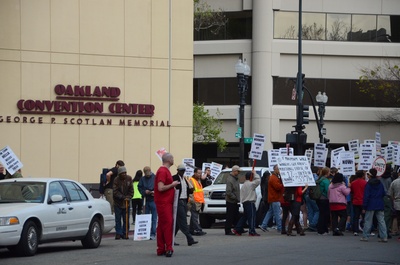 minimum wage march downtown, 3/27/2014
photo CC SA-BY Our OaklandThe Oakland Chamber of Commerce, in response to Lift Up Oakland's measure, has proposed an alternative ballot measure which would increase the minimum wage more gradually than Lift Up Oakland's measure for all workers, and especially gradually for employees of small businesses and nonprofit organizations.8 The plan includes a requirement for paid sick leave. Council President Kernighan introduced a resolution for the City Council to either place this competing measure on the November 2014 ballot, or pass it directly and immediately as an ordinance. Read her memo about it here. At the July 22, 2014 Community and Economic Development Committee meeting, the Committee voted to approve the Chamber's minimum wage measure as an ordinance. If it gets approved by the city council, then it would become law immediately, without going to voters as a ballot measure. It will be discussed by the full city council at their July 29nd, 2014 meeting.

Overview of the Oakland Sustainable Fair Compensation Act of 2014.pdf.pdf

The Lift Up Oakland coalition (the folks who got the measure on the ballot) consists of:

This was included as a sample proposal for residents to indicate their support or opposition in a Feb. 5, 2014 poll that was sent out to Oaklanders.

The Oakland City Council is going to consider a minimum wage increase at the July 29th City Council meeting. The proposed increase was crafted by the Oakland Chamber of Commerce introduced by Council President as an alternative to the ballot initiative which is appearing on the November 2014 ballot. The ballot initiative, crafted by a coalition called Lift Up Oakland, would raise Oakland's minimum wage to $12.25 in March of 2015, with no phase-in and no exceptions. The proposed ordinance from Kernighan and the Chamber of Commerce would gradually phase in a minimum wage increase, reaching $13 an hour by 2017 for some workers, with an even more gradual increase for some workers, such as employees of businesses with fewer than 15 workers, or employees of social service organizations or job training programs. Both the Lift Up Oakland ballot measure and the ordinance introduced by Council President Kernighan would guarantee some number of paid sick days for all employees.

In April, Councilmember Larry Reid proposed raising the minimum wage to $10.20. No action was taken on the proposal when it was discussed at the April 29th Community and Economic Development Committee, and the plan has not been re-introduced (Reid is now supportive of the Chamber of Commerce's plan introduced by Council President Kernighan in July). The union-backed proposal is for $12.25, would increase with inflation and require employers provide at least five sick days for minimum wage workers. He says that that proposal is "too much, too soon." Others say that this kind of minimum wage will keep new restaurants from opening in Oakland. 1 If you have information on other councilmembers' positions on increasing the minimum wage, please add them below.

In 1998, the city council passed a living wage ordinance, #12050, the "Oakland Living Wage Ordinance". It set a minimum wage for: