Miss Horton's School was a "select school for boys and girls" which was founded by Miss Sarah Wyman Horton. 3

Horton founded the school in 1884 on Adeline St., but very quickly had the Filbert and 12th location built. Despite occasional arson attempts and other mischief the school remained there until 1912, when it moved to its final location in the decidedly toney, brand-new Adams Point neighborhood. The facility at Palm and Perkins was spacious and modern, and the school always maintained an excellent reputation, but it did not market itself sufficiently aggressively, and fluctuated several times during its existence between being a girls’ school and going co-ed. After Miss Horton died in 1920, the school continued with 2 co-principals. Its last class graduated in June 1929.

This (and Sarah Horton herself) are “my thing”, unless any of y’all have done the research (I doubt it; it’s pretty obscure today). I, however, have; just haven’t had time to get it together yet. I have a huge clipping file almost ready … Of course in the meantime anyone is always welcome to add whatever they want — Mike (2013-03-01) 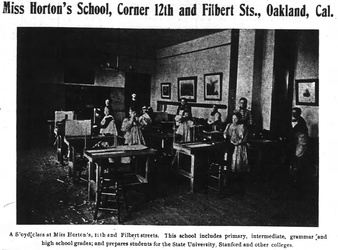 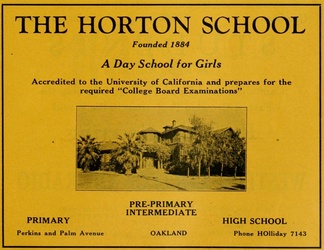