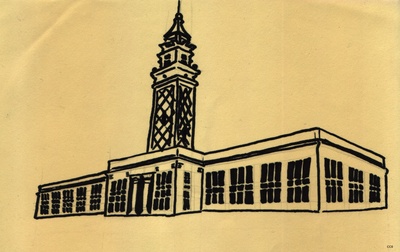 Made during Draw Oakland. (CC0)

Emil A. Hagstrom founded Mutual Stores in 1917 in  Oakland.  Mutual Stores was originally called Mutual Creamery.  In 1929 Mutual  Store were sold to  MacMarr Stores.3 The Mutual Stores building at 5725 International Boulevard was designed by architects Reed and Corlett, and Charles Stockholm and Sons built the building from 1928 to 1931 (note: this does not line up with contemporary accounts of when the building opened). 3 Another source says it opened on May 28, 1928. As of December 2018, the building is being renovated into 59 live/work lofts.5

According to the Oakland Cultural Heritage Survey records, this is a early 20th Century commercial building with Renaissance Baroque ornamentation. This style of architecture is usually adorned with curved forms and elaborate pieces of art which are part of the design, such as the carvings and pillars seen on the top of the tower on this building. 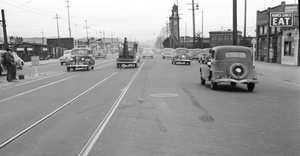 East 14th St at Seminary 1940schristreadwayThe two-story rectangular warehouse and office space are made of reinforced concrete with a steel frame tower, which rises 150 feet. There are reddish brown and light brown terracotta details, including industrial sash—or framed—windows.

The tower originally had a clock with letters instead of numbers that spelled out the name “Mutual Stores.” Cow heads were added to the tower design to represent the company’s start as a store that sold dairy products.3

The clock can just be seen on the tower in this photo from the 1940's, though unfortunately it was taken too far away to make out the letters.

Safeway purchased the building in 1935. 4 Oakland became the headquarters of Safeway Stores’ northern division of grocery store supermarkets, and later the official headquarters of the entire Safeway chain.1 The 1941 Polk’s City Directory for Oakland listed more than 80 Safeway stores in the city, many of which were former Piggly Wiggly Pacific stores. 2 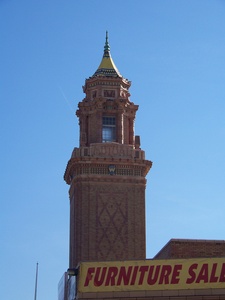 In 1996, Safeway moved its headquarters to Pleasanton. In 2014, it merged with Albertson’s.