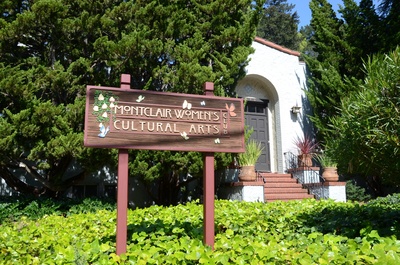 In 1996, Barbara Price bought the property and refurbished it, and it became the Montclair Women's Cultural Arts Club. Despite the similarity of the names, and having used the same building at different times, the clubs are not connected.

A group of men from San Francisco bought the land around 1920. A commonly repeated but incorrect story is that they "planned to build a hunting lodge" 1 but there are no facts to back this up. The current building was constructed in 1926 for $20,000.

There is a historic stairway next to the club that connects to the end of Cabot Drive.

In 1923 a club was formed for women of Montclair, as social outlet and to assist in community development. It was known as the Women's Auxiliary to the Montclair Improvement Club. The name was changed to Montclair Women's Club in 1925 when it became affiliated the California Federation of Women's Clubs. 2 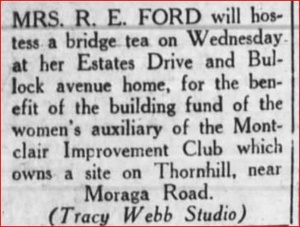 Oakland Tribune February 24, 1924In October, 1923, Mrs. R. S. Floyd opened her home for the first meeting, and 8 women were present. It was decided they would meet once each month in the various homes for programs of social and literary culture. At the January meeting of 1924 at the home of Mrs. Raymond Ford, 19 women assembled and it was there that the "Women's Club" was organized, these women becoming charter members.

Mrs F.M. Johns was elected the club's first president and then Mrs. R. S. Floyd. It was then passed on to Mrs. Stanton W. Lore in 1925, 4 who served two years. It was during Mrs. Lore's tenure the club was admitted into the California Federation of Women's Clubs.

The women worked closely with the Montclair Improvement Club by holding benefits and parties to raise money build a club on a site they owned at Thorn Road and Mountain Blvd.

Soon the club became too large for home gatherings, and in May of 1928 the purchased the Montclair Improvement Club building at corner of Thorn Road (now Thornhill Drive) and Mountain Blvd. valued at $25,000. In November 1928, a fire partially destroyed it, but it was rebuilt. By May of 1928, the club had 89 members.