Morris "Morrie" Turner (December 11, 1923 – January 25, 2014) was an Oakland-based artist and was the first nationally syndicated African American cartoonist, with the comic strip Wee Pals.1 Turner grew up in West Oakland: his father worked as a Pullman porter and his mother was a nurse. 3 Turner began drawing cartoons in 5th grade and continued during his military service with the Airforce in WWII. Although he attended McClymonds High School, Turner graduated from Berkeley High School in his senior year.

Turner had no formal artistic training. In 1964 he began drawing the comic strip Wee Pals full time, and it appeared for the first time on February 15, 1965. 5

Wee Pals was the first strip with a diverse ethnic makeup of the children in a cartoon. It was the early '60s: at first the comic strip ran in only five major newspapers, but within three months of the assassination of Dr. Martin Luther King, Jr., the cartoon Wee Pals was in over 100 newspapers. 5

Turner's intentions in drawing the Wee Pals comic strip were to "portray a world without prejudice, a world in which people's differences -- race, religion, gender, and physical and mental ability -- are cherished, not scorned." 6 In later years Turner also included children with disabilities.

Wee Pals was even leveraged into a TV show: Kid Power, a Rankin Bass animated show that first aired September 16, 1972. The strip has also been adapted into a play. Turner has also written and illustrated children’s books on topics including African-American history, racism, deafness and drugs. 5

In 1975, Turner donated 24 original watercolor cartoons to Donna Guenther, MD, the head of the Immunology-Allergy department at Children's Hospital, in gratitude for the care his 10-year-old son received for allergies. 6

Morrie Turner and his art feature prominently in Jeff Chang's new book "Who We Be."

In 1965, Turner became one of the founding members of the East Bay Negro Historical Society (EBNHS). The collections of the EBNHS later became the basis of the collections at the African American Museum and Library at Oakland (AAMLO). 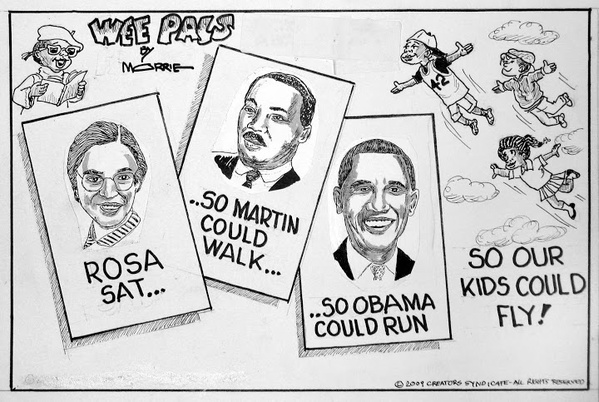