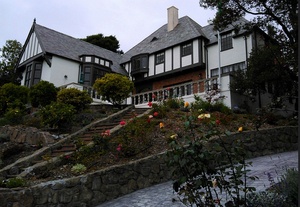 The designer of the house was E. Geoffrey Bangs (1889-1977), a 1914 graduate of U.C. Berkeley who had studied under John Galen Howard before opening his own office. He was a member of the first Oakland Planning commission. He was an architect for nearly 50 years. Mr. Bangs is best known for the Contra Costa Hall of Records, the courthouses in Butte and Shasta Counties and the Women's Athletic Club in Oakland.

Morse House is a private residence located in the Claremont Pines district of Upper Rockridge in Oakland, California.   It was designed for Charles and Mille Morse by accomplished local architect, E. Geoffrey Bangs, in English Tudor Revival style.  It has 4,620 square feet of living area on three floors.  It was constructed in 1936, for the cost of $20,600 by Oakland contractor, J.R. Armstrong.

Morse House exhibits classic English Tudor Revival elements such as exposed half-timbering, cantilevered upper floor, slate roofing tiles, various leaded windows including some diamond-shaped, and various steel sash windows.  In addition, Morse House features custom designer tiles, chromed brass bathroom fixtures, brass window handle and door handles, limestone retaining walls, nail-less oak paneling throughout the main rooms. Of particular note is the sensitivity to seismic concerns in the design and construction, many years prior to seismic code requirements.  The framing is bolted down to the foundations, there are almost no cripple walls and all framing is cross-braced against shear.

The house was designed for Charles S. and Tillie Morse. Charles Morse was the Vice-President of National Rice Mills in West Sacramento, CA. He was one of the pioneering developers of the rice milling industry in California.

Morse House was designated an Oakland Historical landmark in April of 2013.