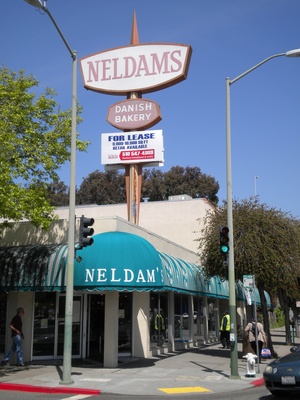 Neldam’s Danish Bakery at 3401 Telegraph Avenue was a beloved Oakland institution from 1929 to 2010.

The bakery employed as many as 75 people in the 1970s. Much of its revenue came from catering to large companies like Clorox and Kaiser. 1 It was forced to close its storefront in 2010, after nearly 82 years. The long-term employees of the bakery formed an employee co-op and reopened as A Taste of Denmark. 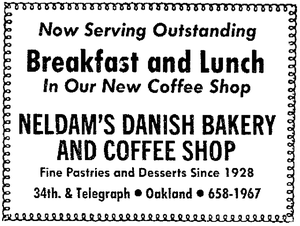 c.1963, there was also a Neldam's in Rheem Valley near Moraga.

In 1965, the Neldams took a cake decorated with a traffic light and the words "34th and Telegraph" to city council member Paul Brom, as a reminder that they wanted a traffic light installed at their corner. 2

The Neldam's added a coffee shop serving breakfast and lunch in 1974.

In 2008, the Neldams sold the building to try to cover rising costs and reduced business 1, but in 2010 they closed up. The new building owners worked with some of the long-time employees to re-open the bakery as an employee co-operative called A Taste of Denmark.