A nexus of the universe occurs when a numbered street intersects with the matching numbered avenue. For example, there is a laundromat at 23rd Avenue and E. 23rd Street called, appropriately enough, "23rd Laundry".

Pages tagged “nexus of the universe”

Here are all the nexuses in Oakland:

17th Avenue and E. 17th Street is a special kind of nexus because while they don't intersect, if they did intersect it would be in the middle of San Antonio Park.

Before International Boulevard was renamed from "East 14th Street", there was a nexus at 14th Avenue and E. 14th Street (right at Saigon Deli and Tacos Valparaiso). It looks like some of the other nexus streets were renamed to avoid confusion. "Commerce Way" is between E. 17th and E. 19th Streets, so one would expect it to be named E. 18th Street. It should be noted, however, that many of the streets now identified as East ___ Street were actually renamed at some point from their earlier names, and Commerce Way appears to have retained its original name. Compare these two map excerpts - one from a 1869 map of Brooklyn and Oakland, and the second from a 1912 map of Oakland.  Note that the current Commerce Way does not even exist in the 1869 map, and is represented as an unnamed alley in 1912. 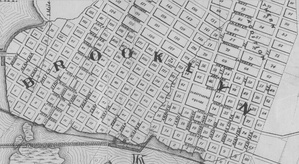 Excerpt from Map of Oakland and Brooklyn - 1869 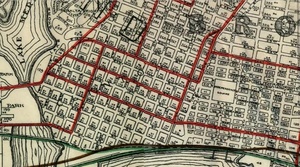 The phrase "nexus of the universe" originates from an episode of Seinfeld.