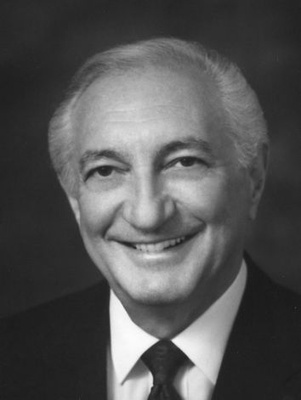 Born in Oakland to Greek immigrants Chris and Mary Petris, Nicholas Petris graduated from UC Berkeley with a Bachelor's degree in journalism, then went on to obtain his law degree from Stanford University.

As one of the leading liberals advocating for such issues as affordable housing, the rights of farm workers, mental health, environmental concerns and tax reform. There is so much to appreciate about Senator Petris, including his authorship of bills banning smoking on buses, planes and trains in California. He was also an early fan of single payer healthcare.

Petris' home was one of 2,700 which were destroyed during the Oakland Hills Firestorm of 1991, along with his entire personal library of Greek history, Greek philosophy and English literature.

Married 60 years to Anna Vlahos Petris, she died in 2010. Nicholas Petris passed away on March 20, 2013 at Piedmont Gardens following a multi-year struggle with Alzheimer's.