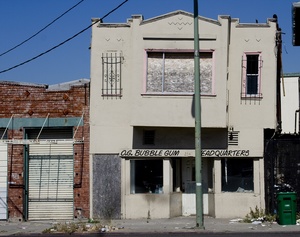 The OG Bubble Gum Headquarters was located at 2547 Seminary Avenue between Bancroft and Fortune in Havenscourt. Sometime after this picture was taken in September 2008, the building was torn down—along with a number of adjoining buildings—leaving a large vacant lot that is ultimately proposed to be transformed into a retail center called Seminary Point.

The story is that the people who ran the place were hairdressers and that they made a hair product that smelled like bubble gum.