On the night of November 21st, 2013, Oakland experienced crazy high winds in the range of 40 MPH with gusts as high as 65 MPH. Picking up on the title of the recently shown B-movie, Sharknado, the name OakNado was quickly adopted by some residents to refer to the storm.

Between 39,000 and 43,000 PG&E customers in the East Bay were without power, and 2 people died in wind related accidents. One person on Austin Street was killed by a falling branch or downed power line. Another was killed driving along Skyline. While attempting to avoid wind-blown debris, they hit a tree and died at the scene.

As of 11am, Oakland Public Works had received over 190 requests for assistance with downed trees and branches. (See story)

The eucalyptus that fell near Lake Chalet became a tourist attraction! It got its own twitter account and here's a blog made up entirely of people taking pictures of it.

In addition to numerous downed trees and countless large branches, I also saw a number of wooden fences that had been blown over by the wind. 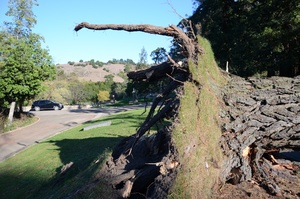 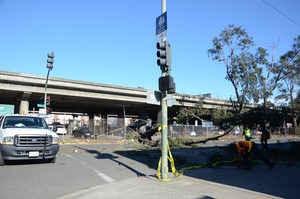 I saw at least one wind-related accident (that took over 2 hours to clear): a street light had gone completely out, not just blinking red, and two cars smashed into each other in the middle of an intersection, on East 12th at 22nd Avenue. The street signs at MacArthur and Champion (?) fell over.