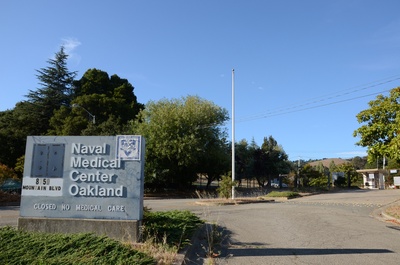 Oak Knoll Naval Hospital in the Oakland Hills served Navy families from 1968 to 1996. On April 8, 2011 the main hospital building, which had been vacant for 15 years, was imploded. Although there were once several military hospitals for military personnel and their families in the San Francisco Bay Area, the decomissioning and demolition Oak Knoll leaves only the Travis Air Force Base medical center, north of Fairfield. 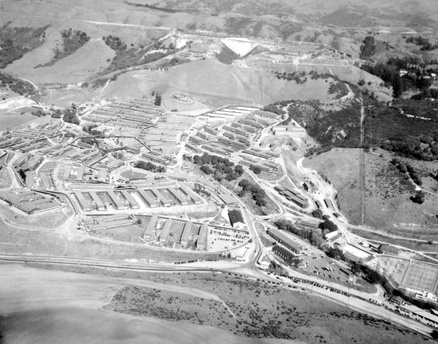 Oak Knoll Naval Hospital, Oakland, California (circa 1946) 1When the site was first commissioned as a temporary Naval hospital on July 1, 1942, there were 25 wooden barracks located at what had been the Oak Knoll Golf Course. The facility grew into a regional hospital for the Navy, providing specialized care for personnel from California and Nevada.

Over the years, the hospital served the medical needs of Vietnam and Korean war veterans, wounded prisoners of war and "ground breaking research in prosthetics, dialysis, tissue grafts and psychiatry" were conducted at Oak Knoll Naval Hospital. 3

Scientology founder L. Ron Hubbard was hospitalized at Oak Knoll while he was in the Navy. According to Erika Mailman, Oakland historian, he used his time there to "avail himself of his ill compatriots to test out his theories of removing mental blocks to allow them to improve."7

In 2006, an entity known as SunCal Oak Knoll, LLC, which was a joint venture between developer SunCal Company and Lehman Bros., purchased 167 acres of the former Naval Hospital site from the Department of the Navy. SunCal then began working on obtaining approval for a development that included 960 units of housing, along with reserving 50 acres for natural open space, with plans to restore Rifle Range Creek, which ran through a culvert when the hospital was present.

In September 2008, after multiple hearings on the project and the EIR before the Planning Commission, just when the project was ready to return to the Planning Commission and the City Council for final approvals, the entire project was put on hold due to the bankruptcy of Lehman Bros., SunCal's financial partner.4The LLC property owner itself filed bankruptcy in late 2008 / early 2009, although SunCal continues to do business.

Community organizations in the area had for years attempted to have the City of Oakland, the Navy and/or SunCal clean up the Oak Knoll Naval Hospital site after it was decommissioned in 1996.In October 2009, SunCal used $550,000 from the Lehman bankruptcy estate for property-wide weed abatement, cleaning up wood piles, repairing perimeter fences and providing a team of armed security guards 24 hours per day to help secure the property from trespassers. In January 2011, the presiding federal judge in Lehman Brothers’ bankruptcy approved the release of $1.7 million to complete the major demolition work at Oak Knoll. This meant that demolition of the major concrete and steel buildings would move forward; the warehouse and the bachelor enlisted quarters have since been removed. The 11-story hospital building, the largest structure on the site, was imploded in the spring of 2011, before a number of dignitaries and other invited guests. All structures to be demolished were first cleared of lead and asbestos. 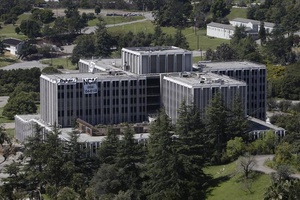 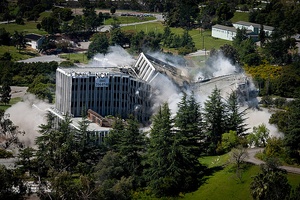 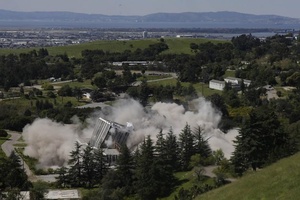 On April 30, 2012, the property was deeded to a new entity known as LV Oak Knoll LLC, a limited liability company organized under Delaware law.5Not much is known publicly about this new entity.In April 2013, however, Signature Development Group announced that it would be teaming up with Lehman Bros to develop the site.6According to Larry Reid, Signature will be proposing a development plan with 960 housing units, 100,000 square feet of retail space, and 30 acres of open space -- 20,000 square feet more retail space and 20 acres less open space than proposed by SunCal.

In May, 2014, SunCal purchased the space AGAIN for $76 million, after the deal between Signature and Lehman broke down. SunCal had originally partnered with Lehman Brothers who went bankrupt in 2008. The original purchase price was $100 million in 2005.8