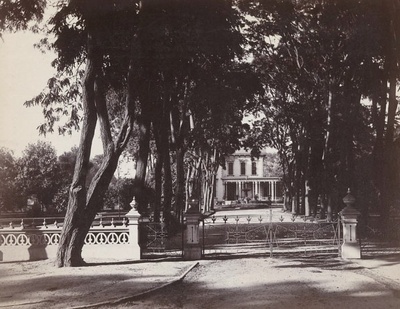 Oak Tree Farm Tract was created through the acquisition of over 200 acres of the Peralta Grant which began on July 6, 1854 with the purchase of 35 acres from John Kennedy by Watson Augustus Bray and his brother John Grandid Bray.  An additional 75.31 acres were bought for $5,000 by the brothers from Mr. Kennedy four years later.  Watson A. Bray purchased 37.98 adjoining acres from J. B. Lemoine for $5,697 in 1863, and within a few days bought another 53.83 acres from Mr. Lemoine.

In 1858 Watson Bray completed construction of his "Oak Tree Farm" country estate in what was then known as 'Fruit Vale' and moved in on January 20, 1859 with his wife and baby daughter Emma from San Francisco.  While living at Oak Tree Farm the Brays had five more children here. What is now 28th Avenue was called Julia Street, named for Mrs. Bray.

The Fruit Vale district continued to evolve, with other prominent families moving to the area to build large homes and estates surrounded by extensive lawns, tree lined drives and flower gardens, as well as vegetable gardens and luxuriant fruit orchards [hence, 'Fruit Vale' or later 'Fruitvale'].    All of these homes had numerous out-buildings, such as barns, horse stables, carriage houses, arbors and gazebos.  These neighbors of the Brays were influential in the development of Oakland and the San Francisco Bay Area, including such prominent families as the Requa, Derby, Harmon, Wellman, Harrub, Crockett, Wetherbee, and Grimwood families. The following is the real estate advertisement from the sale May 16, 1885 of the Watson A. Bray estate:

"Palatial residence of W.A. Bray, Esq., Fruit Vale also 44 beautiful large subdivisions at peremptory auction.  The Bray residence occupies two city blocks from 14th St. to 16th St. between Julia and Howard Sts. It is within the Oak Tree Farm Tract, which is bounded on the south by east 14th St. and on the north by Sherman St. (now Foothill Blvd.). Sausal Creek forms the eastern boundary of the tract and what appears to be 23d Ave. forms the western boundary. The assignees of the Bray residence are C.C. Knox and Frank Otis. William J. Dingee, and Easton & Eldridge are the real estate agents. The Bray mansion has "18 spacious rooms, elegant in all their appointments; including drawing rooms, parlors, lofty and artistic hall. Complete dining room and kitchen with all modern appurtenances. The sleeping apartments are unsurpassed. Broad promenading piazzas overlooking grounds 260x680, superb in their design..." In addition, a "very beautiful cottage of 8 rooms, bath, etc., handsomely and artistically finished in natural woods..." is also at auction." 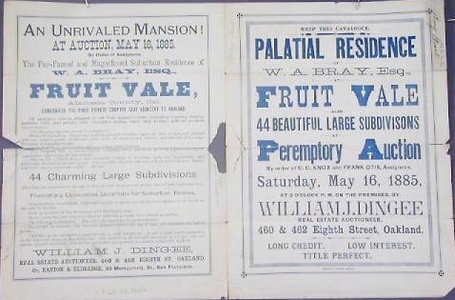 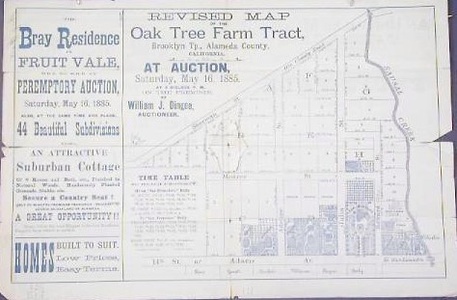 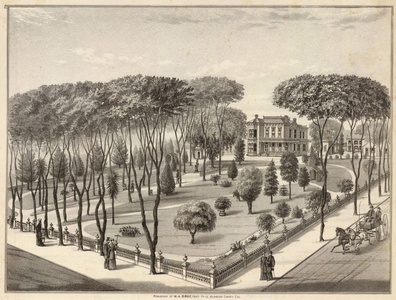 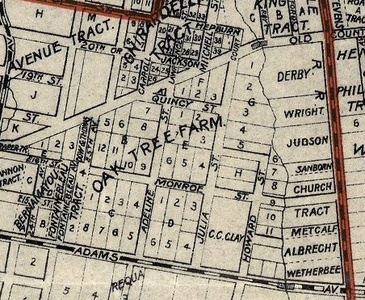