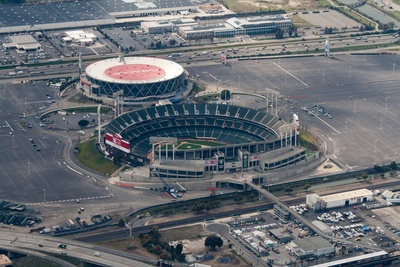 The Coliseum and Oracle Arena from above. photo by  eeetthaannn CC BY-NC 2.0

The Oakland-Alameda County Coliseum (O.co Coliseum) grand opening was held on September 18, 1966 with the football game between the Oakland Raiders vs. the Kansas City Chiefs.   As half of the Oakland Alameda County Arena and Coliseum Complex, over the years hundreds of events have been hosted, such as musical concerts, ice skating shows, sporting events and much more. 1

An extensive renovation begun in October 1995 at a cost of $120 million saw the inclusion of two new scoreboards, two new private clubs, 90 additional luxury suites, and 22,000 new regular seats. This area is known as Mount Davis as it was constructed due to a deal made with the devil Al Davis to bring the Raiders back to Oakland.

O.Co was the center of a lot of a twitter-storm at the end of May when John Heyman tweeted that the A's and Giants "home/home" series should have been played soley at AT&T Park in San Francisco. Although A's fans and owners alike have been desperately trying to move out of Oakland for years, players and fans (but not ownership) rose to the occasion noting that O.Co filled up for the Bay Bridge series, while New York, where Heyman is from, did not. See this article for some tweets from players.

On Sunday, June 16th 2013, the clubhouses backed up with raw sewage forcing the A's and the visiting Seattle Mariners to shower in the Raider's lockers or not shower at all.