The Oakland Auto Camp was located at 8603 Hillside Street.  It was apparently started some time before 1923, the year it was purchased by Henry Munsterman, and appears on the 1925 Sanborn as simply "Auto Camp Grounds." During 1937, Mr. Munsterman sold the camp to John Humbert, who had become his stepson when Mr. Munsterman married Mr. Humbert's mother (a widow) in 1933. Mr. Humbert renamed the operation as Oakland Auto Court, and expanded and improved the facilities. 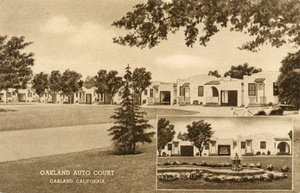 Postcard courtesy of  Alamedainfo.comAn ad in a January 1937 telephone book for Oakland Auto Camp advertised "30 attractive, homelike cottages," some with kitchenettes. A later postcard for Oakland Auto Court showed cottages with tile roofs, arched porches, and garages linking the units, and noted that the facility was only one block from "U. S. Highway No. 50" and "20 minutes to down town Oakland." 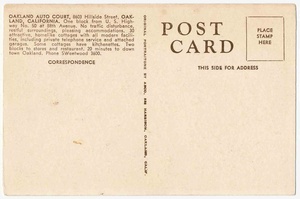 Back of postcard, via eBay auction 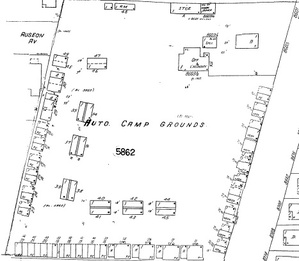 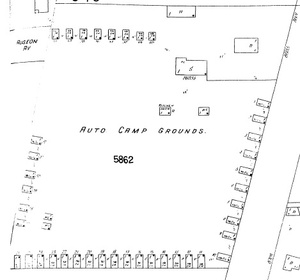