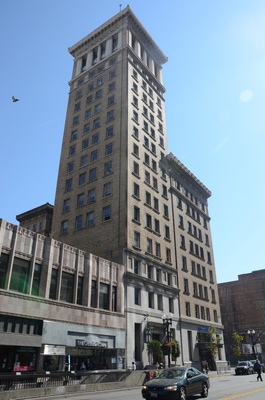 The Oakland Bank of Savings Building is a Beaux Arts office building located at 1200-12 Broadway / 448 Twelfth Street, Oakland, California.  Designed by architect Charles W. Dickey in 1907-1908, Reed and Corlett were the architects in 1922; the builders were the Mahoney Brothers and P. J. Walker. After Oakland Bank of Savings was taken over by Bank of America in 1929, the building was referred to as the Bank of America Building in directories. 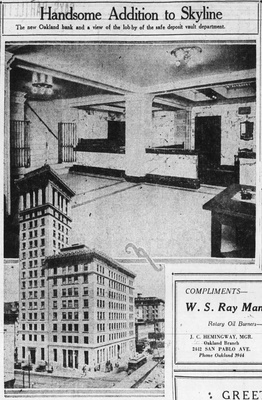 "This building is an eight story Beaux Arts bank and office building at the southwest facing corner of Broadway and 12th Street (1907-09), with an 18 story tower addition to the north at 1210-12 Broadway (1922-23).  Both sections are of steel frame and brick construction, clad in light gray granite at the bases, brown brick on the shafts, and brown brick and terra cotta on the capitals, with elaborate cornices and Renaissance and Baroque ornamentation.  The corner building was built as six stories, and expanded to eight stories two years later, with a rich terra cotta entablature on the added top.  The shaft consists of brick walls with undifferentiated piers and spandrels.  The newer tower has a three story granite base with a central monumental entry, a simple ten story shaft, and an elaborate capital and cornice.  Its frieze is actually a grille in front of the 17th floor windows.  Some of the upper floor windows have been replaced with plain aluminum sash, and doors and windows on Broadway remodeled.

The Oakland Bank of Savings, described in 1911 as the oldest and largest bank in Alameda County, was organized in 1867 by A. C. Henry and moved to the present corner in 1871.  In December 1929 it was absorbed by the Bank of America, which continued to operate here into the 1990s.  Charles W. Dickey, designed of the 1907 structure, was a major Oakland architect who also designed Kahn's Department Store (1501-39 Broadway) in the district.  Walter Reed joined with Dickey for the second phase of the Oakland Bank Building, and thirteen years later, Reed and his then partner, William Corlett, designed the tower addition.  Reed & Corlett designed six other buildings in the present district, the largest number by any single firm.  The six story 1907 building was Oakland's second steel frame "skyscraper," and epitomized Oakland's rapid post earthquake growth.  When finished in 1923, the 225' tower was the second tallest building in Oakland (after City Hall) and an important symbol of Oakland's rapidly expanding metropolitan ambitions." 1

This historic building is #2 on the list of District Contributors for the Downtown Oakland Historic District Registration Form.