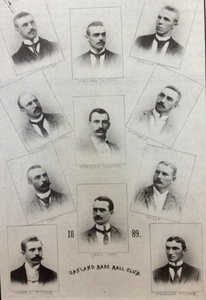 In 1891 they couldn't do anything right: 46 players played for the team, the new ballpark near Trotting field was as bad as Candlestick park when it came to the wind, and the smoke from the iron plant next door obscured the view of both the players and the fans.The team finished last with a record of 45-102, 45 games out of first. Norris "Tip" O'Neill was on that team.

In 1892, the club played at the new ballpark on Waverly Street. Tip O'Neill started off the year by saying he was retired, then showed up as a ticket taker and quickly was back on the team. Fred Carroll was also on the team, along with William "Kid" Peeples, Lou "Pop" Hardie and Parke Wilson. Most of the players didn't make it through the year. They finished the season with a losing record.

1920:  “The Oakland Baseball Club is a member of the Pacific Coast League and present indications point to the team being a contender for the pennant this season.  President J. Cal Ewing and Manager George Elmer “Del” Howard have been in the East scouting for talent and they promise to give Oakland a team to be proud of.  As a starter they signed “Babe” Pinelli, one of the best infielders that ever played on this coast.  The player was taken out of the major leagues by Oakland when a dozen other clubs were trying to obtain his services.  Misfortune has followed the Oaks for the past several years but the Messrs. Ewing and Howard are determined to build up a fast club this year regardless of expense.  Games are played in Oakland Thursday afternoons and Sunday mornings.  When the club was up in the race ten thousand fans and fannies attended the Sunday morning games.  This is a record for the country; in fact, Sunday morning baseball has been attempted in but few places as it seemed doomed to financial failure.  The Oakland Coast League Park, located on Park Avenue, Emeryville, is one of the finest and largest plants in the league.” 3 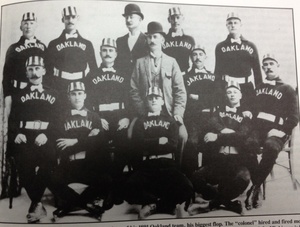 The terrible 1891 team. Tom Robinson is in the middle in the suit, Norris "Tip" O'Neill is to his left2 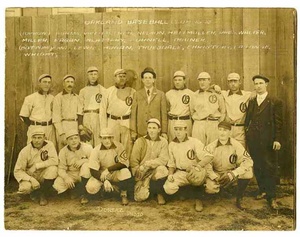