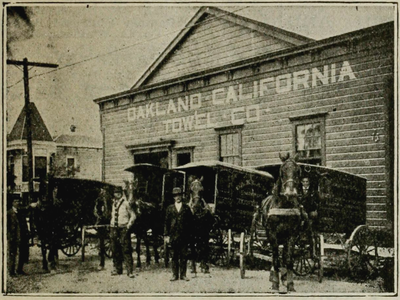 The Oakland California Towel Company was a business 1903-1957+ that provided clean towels and supplies to other businesses. It was at the northeast corner of 28th and Filbert in 1911. In 1930, it moved into new, larger quarters "occupying the entire block." 1

In 1917, they added equipment to handle large contracts, including providing towels for Neptune Beach in Alameda. 3

The 1930 building still stands on 28th St. They also had a cabinet shop in Emeryville where the cabinets for Borroughs' roller towels were made. 1 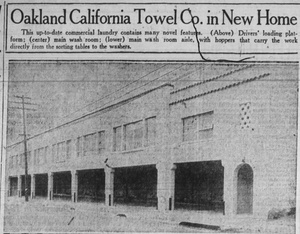 In 1955, Brooke Petray was president, and Robert C. Hoover was elected vice president. 2