The fire started in the unfinished third story, and was first noticed by passersby. The alarm was sounded at 9:15 PM; the large bell in the cupola fell only 20 minutes later at 9:35 PM. 7

Former firefighter Edward Leperle had his left leg broken when the roof suddenly collapsed during the fire. 4, 5

The building was destroyed, but the foundation survived, There was one fatality; the pet dog of school superintendent Fred Campbell was killed by falling timbers. 10 There was time to remove the prisoners from the cells; those with minor offenses were let go and the others transferred to the Alameda County jail. The jailhouse cat also survived. 4 Michael Kelly, who worked for city engineer T. J. Arnold, was nearby when the alarm sounded, and bravely ran in and saved numerous maps and other documents from the engineer's office. 6

At first it was thought that painting supplies left in city hall had spontaneously combusted and started the fire, but the area where the fire began had been cleared of painting supplies and cleaned in the days prior to the fire. Suspicion then fell on arson as the cause. A reward of $1,000 was offered by the city council. 5 (NB: $1,000 in 1877 is anywhere between $2 million and $20 million in 2015 dollars ref)

While arson was suspected as the cause, there was much finger-pointing about the complete loss of the building. 9 The Oakland Tribune ran a story wherein they quote an unnamed citizen who blamed the city council. He said fire chief Mathew de la Montanya had refused to let the council play political games with the department, so in retaliation, they stripped much of his power, so he resigned. 1 (The Tribune was owned and run by William Dargie at time, so it's unclear from their coverage how much was truth and how much was his own political slant. It is true that de la Montanya had resigned, and next chief James Hall hadn't yet been appointed.)

A few days later, the Tribune received a confession note from God. 2

It's unclear if the arsonist was ever caught.

Ed Leperle was treated by the city physician, Dr. Carey, and the city council paid $50 towards his treatment. 3 Later, a medal made from some melted metal found in the wreckage was given to Leperle. 14

The city council passed various resolutions, including one authorizing the use of the bell of First Presbyterian Church (then at 14th and Franklin) for sounding the fire alarm as the bell at city hall had been destroyed. 5

City hall had cost between $60,000 and $80,000 to build and improve. The Tribune said it was only insured for $20,000. The structure was a total loss, but the foundation was intact and would be used to build the next city hall. The Daily Alta California said the foundation was at least half the value of the building. 8

Some people called for Chief Engineer Fuller to resign, though spread plenty of blame elsewhere. 11

A few property owners along Washington St. wanted the city to extend Washington through the plaza to connect with San Pablo. 12 They went so far as to offer to buy the city hall lot for $50,000. 13 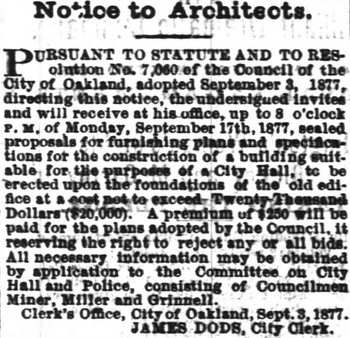