“Without cold storage, Oakland would not exactly starve, but prices of many commodities would soar so high that the H.C.L. would be mild in comparison.

Modern life, especially during the summer months, even in the cool climate of the Bay region, is greatly dependent on refrigeration.

Except for its cold storage reserves, the city could not keep sufficient fresh provisions on hand from December to the following summer to properly feed itself.

Meats, poultry, fruits and vegetables, raised near Oakland, coming in large quantities in certain seasons of the year, would be insufficient at other seasons to supply the local market, were there not some means of keeping them from decay.  Even fishing would be impracticable on the modern scale, if each boat did not carry its own ice box, and each fisherman’s catch were not placed in cold storage as soon as it was brought to port.  To cope with the necessities of such a situation, artificial refrigeration was introduced, at first in a modest way.

With the growth of our population and the increased business for export, cold storage capacity likewise had to be enlarged.

The National Ice and Cold Storage Company of California, which operates the plant of the Oakland Ice & Cold Storage Company, has faith in the future growth of Oakland.  Evidence of this faith is shown in their new cold storage warehouse just completed at Second and Market Streets, the most modern and complete cold storage plant in the West, covering a space of 104 by 184 feet.  The reinforced concrete and tile, three story building gives to the City of Oakland the assurance that its merchants and canners will have ample space at their disposal for the storage of all the goods they have to offer.

The new building contains seventeen rooms completely equipped with all modern facilities for the storage of fruits, vegetables, poultry, eggs, and all kinds of perishable foodstuff.

Modern refrigerating machinery and modern methods of caring for the goods, developed by years of experience in handling California products in cold storage, have been combined to give Oakland a plant worthy of Oakland and its future.

Mr. J. E. Little, who is in charge of the National Ice and Cold Storage Company’s business in Oakland, is constantly on the lookout for any betterment in the service to the company’s thousands of customers.” 1 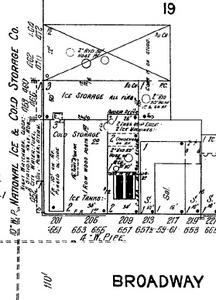 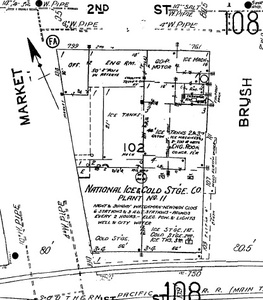