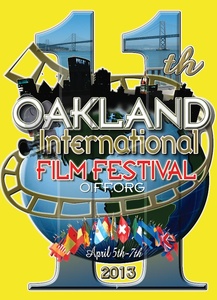 Enjoy screenings of 42 films from Oakland filmmakers and filmmakers from around the globe. The festival kicks off with the feature film “Toussaint L’ Overture” by French-Senegalese director Philippe Niang at 5:30 p.m. on Thursday, April 3, at the Grand Lake Theater, 3200 Grand Avenue. The Oakland Film Market, a networking event for filmmakers and industry executives to share their process of getting their films made, will be held from 6:00 to 9:00 p.m., on Saturday, April 5 at Geoffrey's Inner Circle, 410 14th Street. For more information, please visit www.oaklandinternationalfilmfestival.com.

2013 marks the 11th year for the Oakland International Film Festival.

This year sees films being screened over four days, April 4th to 7th at venues around the city.