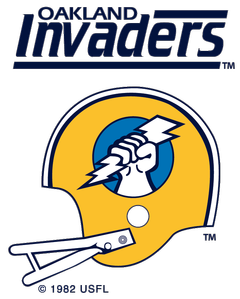 The Oakland Invaders were a team in the short-lived United States Football League (USFL). The team played from 1983 to 1985 at the Oakland Coliseum.

The team won division titles in 1983 and 1985; they won the Western conference title in 1985, losing to the Baltimore Stars in the league championship. 2 The roster included a number of past and future NFL players, including Gary Plummer, Bobby Hebert, Ray Chester, and Anthony Carter. 1 The 1985 team was a merger of the the Invaders and the 1983 champs, the Michigan Panthers. The league disbanded in 1986.

The logo was designed by Oakland Tribune cartoonist Lou Grant.