The Oakland Main Post Office, previously described on this page as "a large ugly building and parking structure located at 1675 7th Street," is the U.S. Postal Service's principal East Bay mail processing and distribution facility. The post office complex, also known as the U.S.P.S. Oakland Processing and Distribution Center, is one of several infrastructure and redevelopment projects — including the Nimitz Freeway's double-deck Cypress Street structure, the MacArthur and Grove-Shafter freeways, the Acorn project, BART, and the realignment of the Nimitz following the 1989 Loma Prieta earthquake and collapse of the Cypress structure —   that remade West Oakland, disrupted the fabric of a long-established Black community and displaced thousands of residents.

The Department of the Post Office and Oakland officials announced a proposal for a new $13 million regional mail facility in August 1958. Officials said the complex would be built on a 12-block site in West Oakland, but did not name the exact location until August 1959, when U.S. Postmaster General Arthur E. Summerfield announced that an area bounded by 7th Street, Peralta Street, the Southern Pacific rail yard and Wood Street would be the site for what the Post Office Department dubbed Project Gateway. The August 26, 1960, Oakland Tribune called the project a "super post office" that would handle mail for 12 Central California counties and for much of the Pacific basin. Summerfield told reporters the new facility would be used as a kind of laboratory for advanced mail-handling equipment, calling it "a revolutionary step forward."

The 12 blocks on the 20-acre site included nearly 200 separate properties, and the Tribune reported in early 1960 that a total of 300 households with more than 1,000 residents would be relocated from the area. Razing of homes began in mid-August 1960 — a process that itself drew widespread news coverage because of the unorthodox method the demolition contractor used on the job. East Oakland's Abdo S. Allen had won the job with a low bid of $64,000. Newspaper accounts spoke of the expectation that bulldozers would show up to begin tearing down houses. Instead, Allen appeared on the scene with a surplus World War II-era Sherman tank purchased for $2,000. 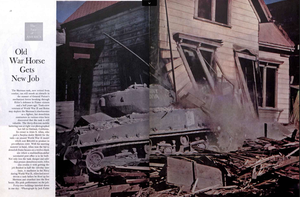 Here's how the Tribune described the scene as Allen began work at 3rd and Peralta streets on August 15, 1960:

“Without pausing, the tank ground into the first house and bored its own tunnel right through. The second story remained intact — but barely so. It was shakily supported by the side walls. Allen piloted the tank around to the front of the house again. The tank was covered with debris and dust, but was otherwise unmarked. Again he aimed at the house. This time there was a roar as the second story came plunging down, burying the tank, but only momentarily. The elapsed time from the first resounding snap to the last dirty roar was 10 minutes." 1

The demolition went quickly, but the process of building the "revolutionary" new facility was slow. It wasn't until July 1965 that the Department of the Post Office announced that an architect was in place — Stone, Marraccini and Patterson of San Francisco — with construction bids expected in October 1965. The winning bidder for the $18.4 million contract was S.S. Silberblatt of New York. The facility — without most of the envisioned advanced equipment — opened in late 1969.