Along with the Oakland School for the Arts, the Oakland Military Institute was one of Jerry Brown's important projects as Mayor. His fundraising and support for the schools means that they both spend around $10,000-$12,000 per pupil (compared to $6,000-$8,000 per pupil for most OUSD schools & other Oakland charter schools). However, according to a 2010 East Bay Express article, that increased spending has not necessarily translated into higher test scores, although the Military Institute sends 90% of students to college (75% to four-year schools) - very impressive!

From the school's web page: OMI's singular purpose is academic excellence. By participating in a military learning environment, cadets will develop personal discipline and leadership skills. The goal of OMI is to graduate cadets who are capable of meeting the academic requirements for any university in the nation and who are prepared for their roles as future leaders. 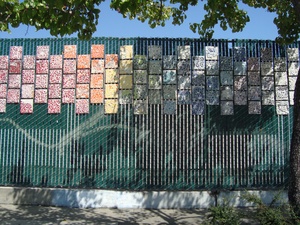 There's a multi-part rainbow mosaic on the fence of OMI on the Market Street side.