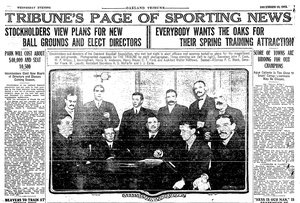 When Oakland old-timers mention “the Oaks” it’s safe to assume they refer to the Oakland Oaks, a 1903-1955 minor league baseball team which was part of the Pacific Coast League. Despite the name, the Oaks actually played the majority of their games at Oaks Park in Emeryville.

Before moving to Oaks Park, the Oaks played at Freeman's Park. They then moved to Idora Park and then back to Freeman Park. These parks were in Oakland.1 See Baseball Oakland's wonderful write up of the Oaks and their stadiums.

The pitcher "Doraldina" is actually a Vaudeville dancing star who was performing in Oakland at the time.

However, more recently, there was also a short-lived basketball team by that name. Pat Boone (of all people!) co-owned that team for a while and reportedly took quite a bath. (Ouch, eh?)