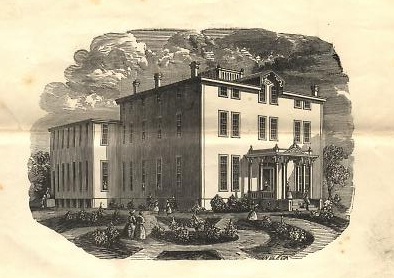 The Oakland Seminary for Young Ladies (aka "Oakland Seminary") was a school for young women started by Millicent Kittredge Blake (aka "Mrs. G. M. Blake"). The seminary occupied a variety of buildings in downtown Oakland, but is best known for "Blake House" where the Oakland Convention Center now stands.

Established on November 8, 1858 in a private parlor at 6th Street and Broadway, the seminary merged with the Pacific Female College in 1871. After closing in ___, the school reopened sometime in 1891.

From A History of Berkeley

According to A History of Berkeley, From the Ground Up (historyofberkeley.org): 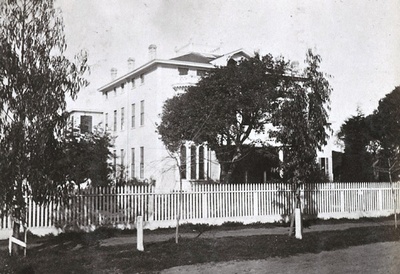 Mrs. Blake's Female Seminary, Washington Street, between 11th and 12th Streets, Oakland (1860 - 1870) 1The Oakland Seminary for Young Ladies was started by Millicent Blake on November 8, 1858 in a private parlor at Broadway and 6th Street with four young women in the class. This first location was right next to where Durant's first school was housed in the "Pavilion", on the corner now occupied by the Oakland Police Department. On April 1, 1859 Millicent moved to a larger room at Broadway and 8th Streets, adjacent to the Shattuck-Hilligass [sic] Livery and later to the building which housed the Shattuck-Hilligass [sic] Opera House, where she remained until March of 1860. At that point she moved to the corner of 5th and Jackson Streets, the former home of J. Ross Browne. The school remained at that location for the next 4 years. Construction of new buildings commenced in June 1863, and was completed on October 24, 1869, located at 528 11th Street, between Washington & Clay. This move would end her odyssey, for this was her own building with construction beginning in June of 1863, and completed in October. The building became known as "Blake House." Oakland City Center now occupies this site. Millicent sent for her sister Mary who arrived to teach History and Literature, while Mlle. Ferrier taught Dancing. In 1881 Millicent, now six years a widow, was living at Blake House, where she was listed as being its "proprietor." In 1887 she resided around the corner at 1121 Washington St., probably in the same building, with her sister Mrs. Elizabeth Shattuck Havens, also a widow. At the time of Millicent's death, on November 27, 1907, she was almost 86 years old. 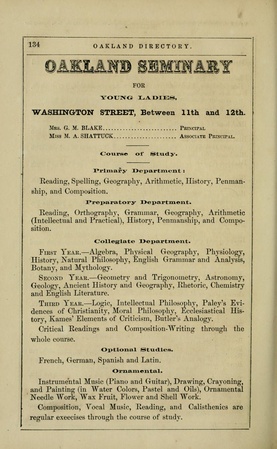 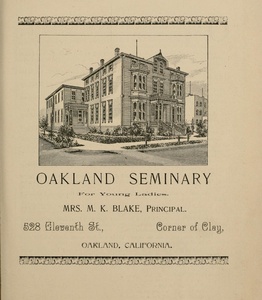 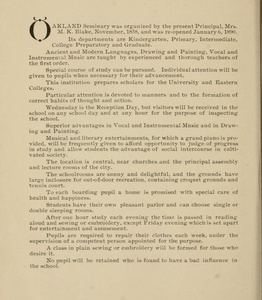 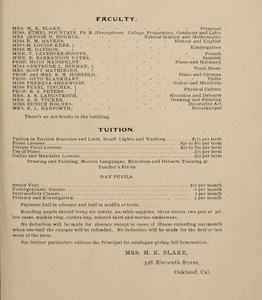