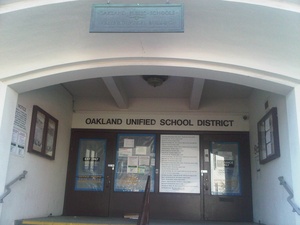 The school district’s website is at http://www.ousd.org. For general info or to contact the superintendent’s office, call (510) 879-8000.

The OUSD main office is located at 1000 Broadway, Suite 300 due to flood damage at the District’s main administration building on Second Avenue. 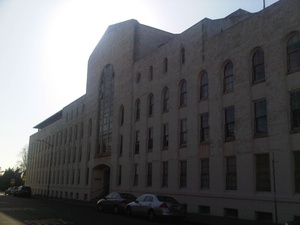 OUSD Building on 2nd AvenueOakland’s first school was established in July, 1853 at the corner of Clay and Fifth. It cost $1000 to build and held 16 students. On August 16th, 1853, this school was declared the “Free School,” to be supported by the city, and Miss Hannah Jayne (later Mrs. Edson Adams) was awarded the sum of $450 for teaching duties. On July 24th, 1853, the first Board of Education was established, consisting of J Kelsey, GM Blake, and A Marier. In 1860, these “Trustees” were renamed “Commissioners.” In 1855 there were 152 students and in 1856 there were 92 students in public school. The Board of Education for the City of Oakland was created on March 31st, 1866.2

The March 12, 1910 San Francisco Call reported, ”in a detailed statement just completed, Superintendent of Schools J.W. McClymonds estimates that it will require at least $1,800,000 to carry out the improvements which the board of education will recommend for the schools of greater Oakland. Among the recommendations … are the purchase of five acres of land adjoining the site of the Frick school; the purchase of two pieces of land east of the Grant schoolgrounds, at a cost of about $15,000; the construction of a new modern fireproof building on the Adams Point tract at the head of Lake Merritt [i.e. Lakeview School]; the erection of a modern school building on a lot owned by the board of education in College avenue; [and] the purchase of from five to eight acres south of the railroad near Park street.” 3

External Links & In the News