Located in Knowland Park, the Oakland Zoo is considered, along with Chabot Space and Science Center and Children's Fairyland one of Oakland's premier destinations for families and their children. 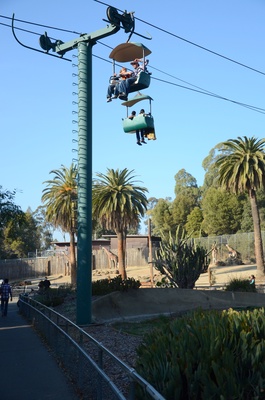 Since 1922 the Oakland Zoo has been in various location throughout the city.

Pre-1800's:  The land which is the current location of the Oakland Zoo was home to the Ohlone people.

1919:  The property was purchased by Cliff Durant (automobile manufacturer)

1921:  Fire destroyed the mansion on the estate.

1922:  The first Oakland Zoo was owned by Henry A. Snow, and located at 19th Street & Harrison Street.  The zoo was eventually moved to Sequoia Park (Joaquin Miller Park).

1926:  Norman Deveaux was the next owner of the Durant Park property.

1932:  Deveaux had financial problems, which lead to the Bank of America taking over title for the property.

1948:  Joseph R. Knowland, the publisher of the Oakland Tribune, who at the time was Chairman of the California State Park Commission. oversaw the purchase of 453 acres for $660,000 by the State, becoming a State Park on April 30, 1948.

1950:  The zoo property changed its name to honor Joseph P. Knowland's dedication to permanently securing the land for use by the zoo, becoming the Joseph Knowland State Arboretum and Park.

1956:  John Clark was awarded the concessionaire contract for the food stands and amusement rides.

1957 - 1961:  William Penn Mott, Jr., General Manager of the City Parks Commission conducted major renovation efforts to both the Zoo and the Park.  A new elephant enclosure ($15,000) was constructed for Miss Effie, the elephant, and the animals were relocated from the lower park area to the present day site.

1965:  Under the management of Lutz Ruhe, the Baby Zoo was opened.

1975:  Knowland State Park was conveyed to the City of Oakland; negotiations began between the City and the Society.

1982:  In August 1982 the City of Oakland turned complete responsibility for managing the entire Park and the Oakland Zoo over to the East Bay Zoological Society, who signed a 10 year management contract with an option to extend in 1992.

1982 - 1984:  Further expansion and development was lead by William Penn Mott, Jr., Director of the East Bay Zoological Society.  The Master Plan for the Zoo was formulated, an Assistant Director/Veterinarian was hired, a fully-equipped animal hospital was established and numerous renovations made on facilities and exhibits throughout the Zoo and Park.

1985:  Joel J. Parrott, in the position as Assistant Director of the Oakland Zoo, was appointed Executive Director.  Much more aggressive development plans were put into place, with a 20 year renovation which took place in six phases.

1987:  School and community groups were provided with on-site classes through the establishment of the Oakland Zoo Education Department.  A Zoomobile outreach program was also begun.  The new Hamadryas Baboon Exhibit was constructed.

1988:  The Zoo established a secure funding base through an operational subsidy from the City of Oakland and the East Bay Regional Park District.   Bond Measure AA provided funding for capital improvements.  the Zoo was accredited by the Association of Zoo and Aquariums, ranking the Oakland Zoo in the top 27% of zoos nationwide. The new Chimpanzee Exhibit was completed.

1991:  Gibbon Island, a spacious new home with 40 foot trees and a river moat for the pair of white handed gibbons is dedicated.

1992:  The one and a half acre "Simba Pori" African Lion Exhibit opens, a savanna and woodland setting with rock structures and pond for the six lions.  Flamingo Plaza opens near the front entrance of the Zoo, a new home for both Flamingos and African Spoonbills.

1993:  The Siamang Island Exhibit is opened.

1994:  The East Bay Zoological Society renews its management contract of the Zoo with the City of Oakland into 2004.

1996:  The Malayan Sun Bear Exhibit is completed.  By December of 1996 the Maddie's Center for Science and Environmental Education is funded with $3.9+ million raised through the capital campaign.

1997:  The Zoo's new Administration Office Building is completed.  The children's rides area is renovated, including the new food service building, seating area, ticket booth, and refurbishment of the children's rides.

1998:  The African Village, featuring 11 animal exhibits, including 18 animals of the savanna and 75+ plant species from South and East Africa, opens to the public.  African art and cultural exhibits are featured, along with South African dance and music.

1999:  The Maddie's Center for Science and Environmental Education has its grand opening in March 1999.  Within the 17,500 sq. ft. center are four classrooms, the auditorium, library and theater, along with Docent and Education Department offices.

2000:  The pair of warthogs have a new grassy Warthog Exhibit which opened in May.

2001:  The main entrance pavilion named "Karibu Village" opens on June 28.  Included within the 20,000 sq. ft. structure, which is designed to replicate the Kenyan village of Lamu, are the membership office, restaurant, gift shop, restrooms and dining area outside.  In July the Tiger Exhibit is expanded during renovation, adding a waterfall and rock formations.  A visitor viewing deck is added to the night house, along with its expansion.

2001:  The new Rainforest Exhibit opens in October, with the Squirrel Monkeys moving into the area of climbing structures and rock formations, vines, and foliage.

2002:  In spring the new carousel showcasing various endangered species opens.  Additional parking is constructed, along with new restrooms, and the giraffes' new barn is completed.

2010:  The Outback Express Adventure Train take visitors to the Wild Australia Exhibit, featuring wallaroos and emus, which had its grand opening in 2010.

In 2012, voters voted down Measure A1 which would have created a parcel tax that would have allowed the zoo to expand into Knowland Park. On March 2nd, 2013, "Save Knowland Park" published a piece about the zoo knowingly lying about the source of a million dollar donation. OW Editors' Experiences at the Zoo