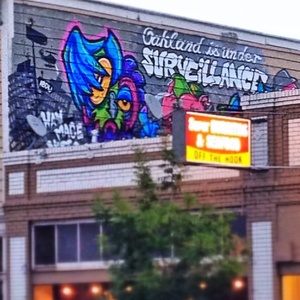 photo by Fuming Guerilla, used with permissionThis mural is by Nite Owl, Ham and Mace. It reads "Oakland is Under Surveillance." Closeup picture here. There are several surveillance themes- one of the owls is covering his eyes, there are helicopters in the sky, a character with binoculars, and a video camera marked FTP.

The mural is located in the 2200 block of Telegraph in Northgate.