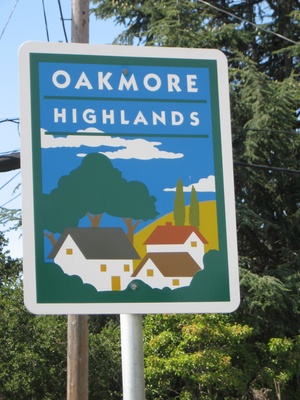 Oakmore Highlands sign
photo CC-A by Our Oakland
Oakmore Highlands (aka Oakmore) is a neighborhood in the Oakland hills next to Highway 13 and Park Blvd owned at one time by Antonio Peralta. The area is largely residential, though it contains a small retail district with Rocky's Market, a Red Boy Pizza, 3 Seasons Thai Bistro, and a number of professional offices.

Learn a lot more about the geology of Oakmore Highlands here.

Preserving the beauty of the area has always been important to the neighbors. In 1926, the Oakmore Homes association included a bit about not cutting down any oak trees until conferring with the home association. The association is still quite active. 1