The Oaksterdam Mural was a giant mural by R.B. Morris III and Munir Munir at 1600 Broadway. It was badly damaged by vandals/taggers in 2012, and the new landlord chose to paint over it instead of a costly restoration. 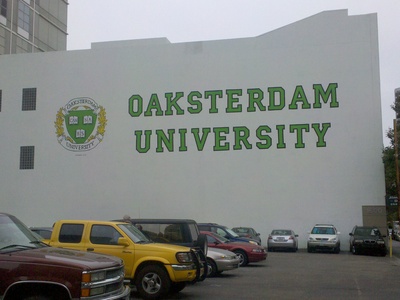 The wall is adjacent to a surface parking lot, and for many years was painted a neutral color. The large, blank space was the frequent target of taggers.

The wall was first decorated with a large Oaksterdam University sign in (20??). Too large, in fact. Because it had no other decoration and was clearly advertising the business, the city deemed it sign, not a mural, and ordered that something had to change because it exceeded the maximum size for the building. So in 2011, after soliciting ideas, Oaksterdam University paid between $15,000 and $20,000 to create a mural. It was designed and painted by R.B. Morris III and Munir Munir.

In late 2012, it began to attract vandals/taggers, with large, red letters scrawled half way up the wall. The building changed owners, and in December 2012, the new landlord chose to paint over it instead of a costly restoration. The fact it had strong Oaksterdam connections may have influenced the decision. However, the decision was unpopular with many Oakland residents who appreciated having colorful artwork gracing the wall instead of blank bricks.