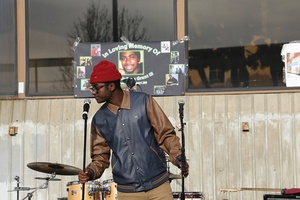 The Oakland Public Library is very excited to announce that 17 year old OBASI DAVIS has been selected as the City of Oakland's 2013 Youth Poet Laureate.  Mr. Davis emerged as the best of eight talented finalists in a competition that began in April with a highly competitive process juried by accomplished authors, educators and community leaders.  Born and raised in Oakland, he is a founding member of the heralded poetry ensemble Young, Gifted and Black. A tenacious student of prose and poetry since age 12, he has dedicated himself to his craft in workshops, at open mics and on stage at some of the nation's largest largest performance venues. He is a member of Spokes, Youth Speaks' teen advisory board and production training program. In 2013 he earned a spot to represent the Bay Area as a member of its delegation to the Brave New Voices international Teen Poetry Slam and Festival.

California Poet Laureate Juan Felipe Herrera, a judge in the competition, calls Mr.Davis a "rare master of the out breath, born into consciousness, singing ...With the humanity voice of Gwendolyn Brooks, the long jeweled line of Ginsberg and his own Obasi magic, here stands a giant poet in the making for the people of Oakland and the world."  Judge Raphael Cohen, a poet and local publisher, recognized Davis as a frontrunner. "He bravely engages the painful puzzles of young adulthood in an era that alternately derides or dismisses young people's experiences, turning inward to explore his, and our, capacity for truth telling and change making. Expertly balancing a focused rage with an irrepressible tenderness, Davis is certain to inspire and activate a new generation of leaders through both the written and spoken word. "