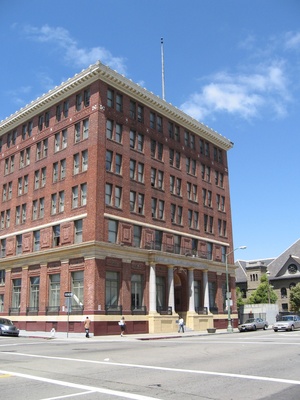 The Old Downtown YMCA Building, also known as the Hamilton Apartments or the Hamilton Hotel Apartments, is at 2101 Telegraph Avenue and 510 21st Street.  It was constructed as a 5-story building (although the second floor does not exist on the side facing Telegraph Avenue) between 1909-1910 (or 1911; sources differ), with two more floors added in 1912-1913 1 by the Christensen Bros. construction firm. The building was vacated when the Downtown Oakland YMCA moved to its current location at 2350 Broadway in ????, and then renovated into an apartment building in 1997.