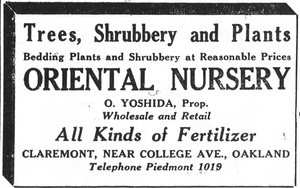 The Oriental Nursery was a small nursery business at 6212 Claremont Avenue, from at least 1918 until 1942.

The earliest reference is an ad from 1918, and lists Mr. Hirmoka as the proprietor; 1 a 1921 ad lists Hirouaka & Son. 2 The 1925 directory lists Henry E. Hatta (wife Martha) as a salesman, and Kosaku Tanaka associated with the business. 3 A 1926 publication lists A. Hironaka. 6 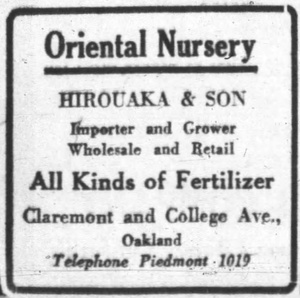 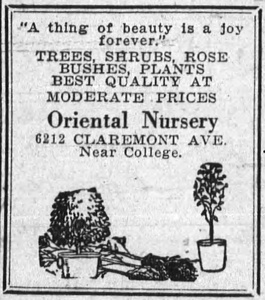 The 1940 census is the most complete record of the family found so far, giving the names and ages of the whole family. Listed with the family is Thomas Toyota (born c.1914), who appears in the 1941 directory as the nursery manager. 5

Then on February 19, 1942, FDR signed Executive Order 9066 ordering the "relocation" of people of Japanese descent, and the trail is lost. Otoichi and Tsuruko do not appear in the government internment records, and there are no exact matches for the children.