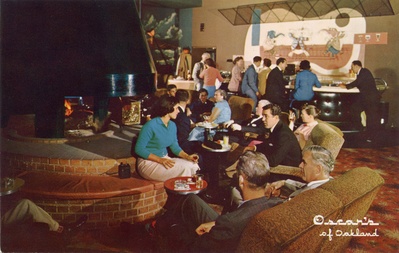 Oscar’s was a restaurant with fireplace and piano bar located at 3285 and 3277 Lakeshore Avenue. Currently, there is a Gap store in the former location of Oscar's.

The addresses are not adjacent; in the 1940s and 1950s, they were separated by Phyllis' Apparel Shop (3281), and McNeill's Men's Shop (3279). But at some point, the bar and restaurant were connected behind those shops.

In 1936, Oscar Bowers opened Oscar's Cocktail Lounge at 3285 Lakeshore. A few years later in 1940, he opened the Confucius Restaurant at 3277 Lakeshore. The circular fireplace dates back to this era. 4

Bowers drowned in an accident while fishing on the Trinity River in October, 1943. 5 The lounge and restaurant were two of the main assets of his estate, so the executor of his will made arrangements to keep them running while his estate was settled.

In 1946, Oscar's was purchased by the Souza brothers. They kept the Oscar's name, which came to refer to both the lounge and the restaurant.

Food at Oscar's was American Cuisine, with the famous "Oskie" Steak which cost $3.50 in 1974. Eunice Steele was the piano-bar artist for over 25 years. Oscars was home to entertainer Danny Marona for about half a year. 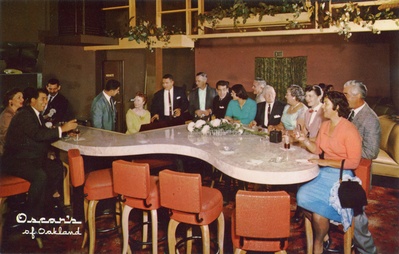 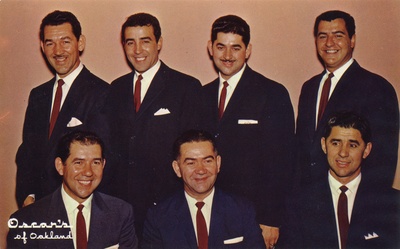 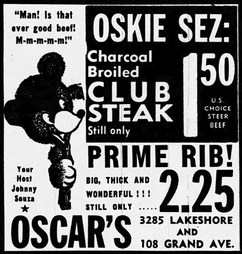 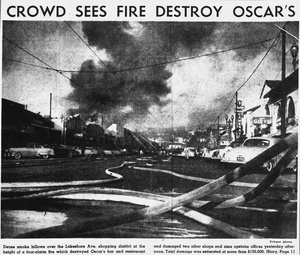 The evening of September 26, 1954, a water glass was knocked over and tipped over a candle, and the nearby curtain caught fire. The rapidly spreading flames triggered a four-alarm fire, and destroyed the restaurant. Five people suffered burns and other injuries, including 2 waitresses, 2 firefighters and Anita Souza, wife of John Souza, who worked as hostess.

The fire started at the front of the restaurant section at 3277 Lakeshore, and spread to the bar section at 3285 Lakeshore. The two shops in between, Phyllis' Apparel Shop (3281), and McNeill's Men's Shop (3279) both suffered smoke and water damage.

The fire attracted thousands of onlookers, so the 3rd and 4th alarms had trouble getting to the fire. A total of 12 pieces of fire equipment and 65 firefighters battled the blaze. 3