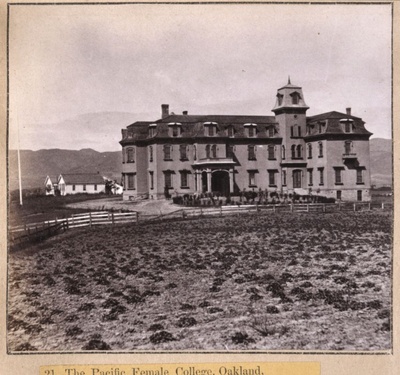 The Pacific Female College was a women's college just south of where the J. Mora Moss House stands, on what was "formerly the ground of O. C. Brown, esq." It was organized in 1863 and incorporated April 23, 1864. Reverend Edward Brown (E. B.) Walsworth was president, as well as professor of Sacred Literature, Mental and Moral Science, Constitutional Law, and Natural Theology. Trustees in 1864 included Solomon E. Alden, Ralph W. Kirkham, and David Douty Colton. It was renamed the Female College of the Pacific circa 1867.

At the time, the nearby streets included Vassar Street , Holyoke Street (Elm Street), Ingham Street (Andover Street) and College Avenue (34th Street + Hawthorne), and Pill Hill was known as Academy Hill. Vassar (1861), Holyoke (1837) and Ingham (1835/1852) were all women's colleges that existed at the time, and E. B. Walsworth had been president of Ingham, so it's easy to see where they got the names.

In the 1860s women still didn't have the right to vote, and education options were limited. However, the Pacific Female College had a fairly rigorous plan for the students, including mathematics, philosophy, various sciences, theology, and languages:

It is the determination of the Trustees that no young lady shall pass through the prescribed Course of Study without being able to read with taste and spell correctly the words of her mother tongue, and both speak and write the English Language, the noblest vehicle of thought on the earth, with propriety. The rule is—thoroughness in all departments ; but in English preeminence. 1

The College Department included four years of study: Protomathean, Philomathean, Junior and Senior, with a variety of studies each term. The College granted two degrees, A.E., "Artium Excelsior" and S.B., Baccalaureate of Science. 1

The list of young women who attended the college is quite lengthy; see the Circular 1 for a partial list from 1864. But there are many familiar family names from Oakland history: Alden, Abell, Delger, Harmon, Lewelling and others. Most were from Oakland and San Francisco, but a few were from Nevada.

The property was sold March 21, 1871 to the Pacific Theological Seminary (which later moved to Berkeley in 1901) for $80,000. But June 30th, Rev. E. B. Walsworth leased "Mrs. Blake's Female Seminary building" (the Oakland Seminary for Young Ladies), and the two were merged in July 3. Walsworth had wanted to build a new building north of Lake Merritt (where he owned property) to continue the Pacific Female College there. 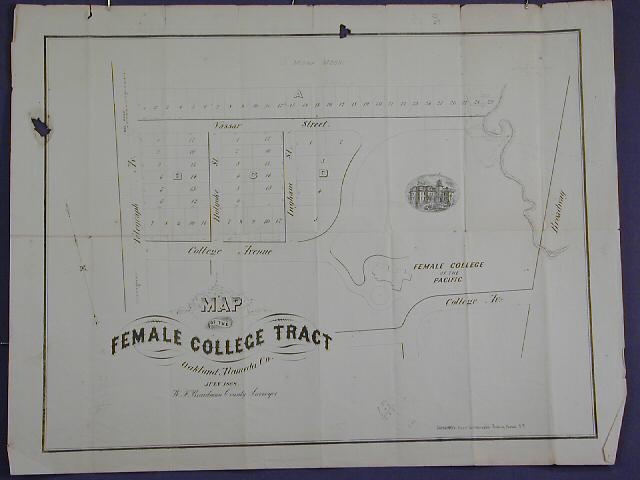