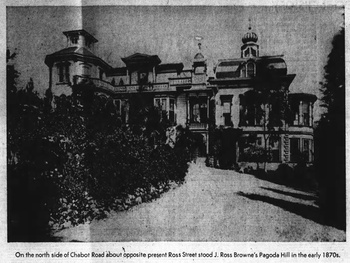 Pagoda Hill was the name of the palatial home built by J. Ross Browne (1821–1875) for his family in what was then called the Claremont District, but is now part of Rockridge. Browneʼs time in it was sadly short, as he died of appendicitis just a few years after it was built. The area around it was later subdivided and referred to as Pagoda Hill for some time afterward. 4

According to a Knave column in 1961, the home was constructed c.1873. 3 According to Oakland History Room librarian Kathleen DiGiovanni, ”Pagoda Hill was torn down in the 1920s to make way for development.” 2

”When Browne returned to Oakland [from China] the home that he had designed and built was described as being “without regard to unity of design or the laws of taste — a cupola from Moscow here; a Chinese gateway there; a Moorish dome on a French roof; a Saracenic belfrey and a Japanese temple — all tossed together in the strangest manner, like the vagaries of a travelerʼs dream.” (Browne, J. Ross. J. Ross Browne, His Letters . . . , p. 354.) Browne called his “home on the hillside” in the Vernon Park area Pagoda Hill, and “gathered about him as many of his children and grandchildren as he could.”  (Browne, J. Ross. J. Ross Browne, His Letters . . ., p. 353-54.; photograph of Pagoda Hill, facing p137.) All that remains of J. Ross Browneʼs estate is the short street named Ross, that originally ran between Chabot Road and Florio Street, and has now been extended slightly on each end.  Note that what is now the top portion of Harwood Avenue was previously called Pagoda Place. 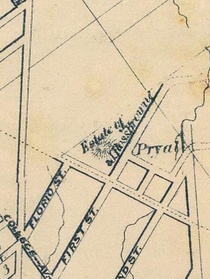 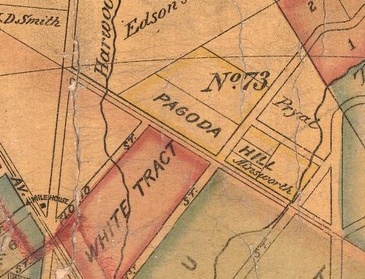 ”In keeping with his worldwide travels, the home combined the architectural styles of Gothic, Moorish, Chinese, Indian, Italian, and Russian (which was also said to be the crazy amalgam of Uptownʼs Fox Theater as well). According to his letters, as quoted in Barbara Lekischʼs Embracing Scenes about Lake Tahoe and Donner, Browne referred to his home as “without regard to unity of design or the laws of taste — a cupola from Moscow here; a Chinese gateway there; a Moorish dome on a French roof; a Saracenic belfry and a Japanese temple — all tossed together in the strangest manner, like the vagaries of a travelerʼs dream.”

”Much like the sprawl of Joaquin Millerʼs cabins in the Oakland hills, Browneʼs estate included scattered homes for family members. With his wife Lucy A. Mitchell, he had around 10 children (reports vary as to the exact number). The wayfarer died in 1875 of appendicitis that struck on the ferry ride home from San Francisco. Too sick to make it back to Rockridge, he lodged with a friend on the estuary and died that night at age 54. He is buried at Mountain View Cemetery.”

”Pagoda Hill was torn down in the 1920s to make way for development, says Oakland History Room librarian Kathleen DiGiovanni. She has previously written about Browne for the Oakland Heritage Allianceʼs News. She says, “Browne is such a fascinating and under-appreciated figure in Oakland — and California — history.” 2

Question(s) Am wondering if by 1887 was the Browne house a boarding house; an apartment or multi-use building; an actual neighborhood; or what?? Do the old maps of the time show a neighborhood by the name of Pagoda Hill? For the people living “near” Pagoda Hill was the Directory just using the house for directions as it was so well known? If that were true, then why are the other people listed as living at Pagoda Hill? And what about the Pagoda Hill Kindergarten? Was it located in the same house with everyone else or in a separate building either on the property or in the same neighborhood? Inquiring minds want to know! Further research is needed . . . [I saw that reference to the kindergarten, but it was located on Telegraph near (I think) 15th Street, so did not see a relationship. I think it was just a name.] Apparently the kindergarten started in the Pagoda Hill area, moved to Telegraph, then in 1886, moved back to Pagoda Hill. ref

Okay, the Bancroft Library has a Cadastral map showing landowners of the “Pagoda Hill Tract” which “Covers Florio and Vernon St. area north of Temescal Creek, now on College Ave. in the Claremont District of Oakland “ . . . the residence of the late J. Ross Browne . . . “ Includes text. [Not sure if it can be viewed online . . . ] j[it canʼt; I keep meaning to go in and examine the map. The former Browne property was subdivided using the name Pagoda Hill Tract, but I donʼt think the name Pagoda Hill was used for very long. I live in the immediately adjoining tract, known as Eucalyptus Hill on the subdivision map, but that name does not appear to have ever been used. See also this photo with Pagoda Hill in the background — I assumed it was the house.]

The Bancroft Library has the J. Ross Browne “Collection includes portraits of J. Ross Browne and family, sketches and illustrations from J. Ross Browneʼs books, views of residences of the Browne family (Pagoda Hill, Oakland, Calif.), and sketches done by May Browne Hoffman,” but no online items, and goes on to state “UNAVAILABLE FOR USE.”

[ See the Old Oakland maps [http://www.teczno.com/old-oakland/] and find Ross and Chabot near the Rockridge BART station in one of the more modern maps. Then switch to 1912. 1877 map doesnʼt go that far. — Gene ] [Note that what was called Vernon in the entries above was previously known as First Street, then 59th Street, and is now Chabot Road. — NAParish]