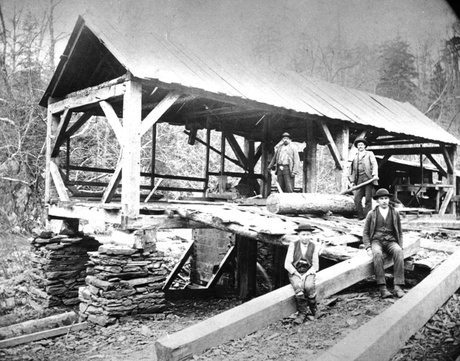 French naval deserters known as Sicard and Leroy likely began construction on the Palo Seco Mill in 1841, according to Amelia Sue Marshall's book East Bay Hills: A Brief History. It was located on the Palo Seco Creek, a short distance above Dimond Canyon. Before its completion, the mill passed into the hands of Harry Meiggs, and later sold to Volney D.Mooney. By the fall of 1852, Daniel A. Plummer was operating the mill and continued operations until about 1854 when the woods in that area were cut.

The original photograph above was owned by Adaline B. Hill, granddaughter of Volney D. Moody, the owner of the property along the Palo Seco Creek above East Oakland where the sawmill was situated. The photo was taken long after the monumental San Antonio redwoods had been clear-cut to meet timber demands immediately following the California Gold Rush of 1849.