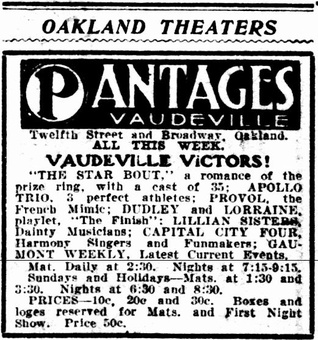 In 1947 the building became the Oakland Tribune’s printing press facility, and in 2007 was ‘redeveloped’ into mixed-use space by MPF Corporation. 3

The building is a member of the Downtown Oakland Historic District.

The building is a three story steel frame and concrete former theater, office, and commercial building on a corner lot. The building is faced with scored stucco, with a modillion cornice, Tuscan pilasters, and entablature on the ground floor, and paneling at the west end where the theater entry was located. Set back on the roof is a two story penthouse housing the auditorium and fly tower of the theater. On the street fronts windows are punched out in regular rows, many of them now covered over.

The theater in this mixed use building opened as the Pantages vaudeville house, and was subsequently known as the Lurie, Hippodrome, Premier, Roosevelt, and Downtown. Architects O'Brien & Werner were especially known for Masonic temples and auditoriums. The Tribune Publishing Company bought the building in 1927 to expand its printing plant from next door into the office areas, and then occupied the theater space in 1946. The Tribune vacated its downtown buildings in 1992.

This historic building is #36 on the list of District Contributors for the Downtown Oakland Historic District Registration Form. 4