The Parcells Safe Company was an early 1900s safe company with offices in Oakland and San Francisco. "Safes Opened, Repaired and Rebuilt". They were agents for Diebold Safes and Bank Vaults, and the Syracuse Safe Co.

The company was first run by Charles Bennett Parcells. In the 1880s, Parcells was manager for the Hall Safe and Lock Company of San Francisco. There was controversy about his accounts in 1887, and he sold some real estate to Mr. Hall, possibly to cover the shortfall 3. By 1889, he was listed as an agent for the Diebold Safe and Lock Company, with his sons Frank M. Parcells as a salesman and Charles Edward Parcells joining as the bookkeeper in 1890. 4

Charles B. Parcells died in 1902, and his son Charles Edward Parcells took over. The company had a office in San Francisco which was burned out by the fires following the 1906 earthquake. They temporarily opened an office in the Maple Hall at 14th and Webster in Oakland. Frank Parcells was listed in a 1906 directory as an attorney at the same address. A 1907 listing gives their Oakland address 659 Washington, and their phone number was Oak 7528. 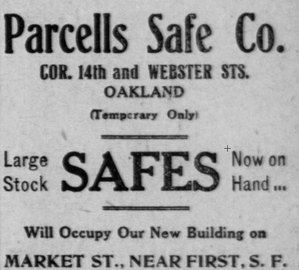 In 1907, a young woman who worked as a stenographer for the Parcells company made the papers when she killed herself. 1 In 1909, a one-time employee was accused of being part of a bank robbery plot in Monrovia, CA. 2