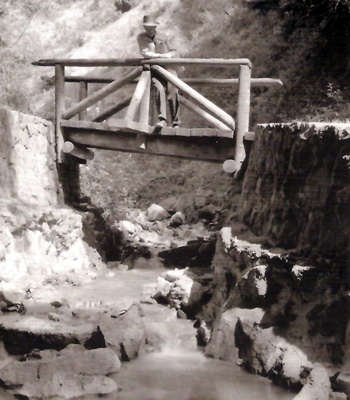 Paul Frederick Covel (August 31, 1908 – May 2, 1990) was the legendary naturalist at the Lake Merritt Wildlife Refuge for more then 20 years, from 1948 to the 1970s. Hired by William Penn Mott, Jr. (Oakland Park Director) in 1948, Paul Covel was the first Municipal Naturalist anywhere in the nation. 1,2 Covel was considered "a remarkable scientist, teacher and enthusiast for Oakland’s wildlife and native ecosystems." 1

Covel was born in Massachusetts, but went to high school in San Diego, where he pestered the zoo until they gave him a job as a birdkeeper. Covel went to work for the Oakland Museum in 1937. A January 6, 1939 Tribune article describes: "Paul Covel, naturalist at the Lake Merritt Game Refuge, will discuss waterfowl life in its natural habitat and at the Lake Merritt refuge. ... He will illustrate his talk with colored slides." The 1940 census lists Paul's profession as "Bird Tender" and the industry as "care of wild birds for city". The 1943 city directory at that time lists his occupation as attendant at the Snow Museum. Paul and his wife Marion lived at 3133 Jordan Road, and they had three? children: Pauline, Andrew and James (1954-).

The Rotary Nature Center was designed by Paul Covel in 1953.

The city honored his work in 1970. A May 3, 1970 Tribune article quotes Mott: "Paul Covel, in my mind, has contributed more to the conservation consciousness of the people of the Eastbay than any other single individual," said William Penn Mott Jr., director of the State Department of Parks and Recreation. "Covel was the first naturalist to be hired by a city park and recreation department in the United States," Mott noted.

There is also an unpublished article:

“A Walk in the Coast Redwoods of the Oakland Skyline (The Palos Colorados of Rancho San Antonio)”; unpublished; circa 1986; in the EBRPD Archives.

"Devil’s Punchbowl was such a sight by the time it was abandoned that well-known Oakland Naturalist Paul Covel conducted tours of the pit and mine shafts after the operation closed." 3

Paul Covel is the father of James "Jim" Covel, the Senior Manager of Guest Experience at the Monterey Bay Aquarium.