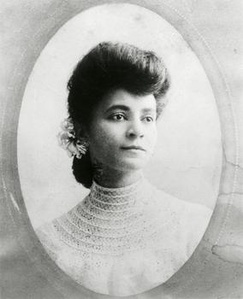 Pauline Powell Burns (June 1872 – June 1, 1912) was an early artist and musician in Oakland. She was probably the first African American woman to have an art exhibit in California. 1

Her great-grandfather was blacksmith Joseph Fossett, one of Thomas Jefferson's slaves who was freed by the terms of his will in 1826. Her grandmother Isabella Fossett was also a slave, and as a child was sold away from Monticello in 1827 as part of a settlement of estate debts, later escaping to Boston. 2 Powell's parents William Powell and Josephine Powell moved to Oakland where Pauline was born in 1872. William was a Pullman Porter for the Central Pacific Railroad. Their home was at the corner of Jefferson and 16th. 3

Very few of Powell Burns' paintings are known to exist. One source on Wikipedia says that two watercolors are at the Dunsmuir Hellman House. Another site said that the Oakland Museum of California had the largest collection of her work. The National Museum of African American Culture and History in Washington, D.C. has an oil painting of violets, painted about 1890. 4 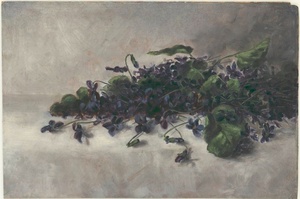